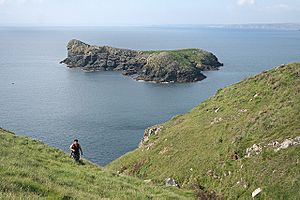 Mullion Island (Cornish: Enys Pryven, meaning worm island) is an uninhabited island on the eastern side of Mount's Bay, Cornwall, in the United Kingdom. It is approximately half a mile (0.8 km) offshore from Mullion Cove, 1 mile (1.6 km) in circumference and the highest point is 118 feet (36 m) above sea level. It forms part of the Lizard Peninsula Area of Outstanding Natural Beauty and is within the Mullion Cliff to Predannack Cliff Site of Special Scientific Interest.

The island was formed 350 million years ago, in a fashion similar to the mid-Atlantic ridge today, where lava flows from a split in the earth's crust, and cools rapidly to form large lumps known as pillow lava. Mullion Island was formed by a separate (later) volcanic episode than the nearby Lizard complex rocks. The soil is highly manured by bird droppings, rich in nitrogen and phosphate, and sea beet (Beta vulgaris subsp maritima) and tree mallow (Lavatera arborea) are the dominant plants. Great black-backed gull (Larus marinus) breed on the island, along with common guillemot (Uria aalge), Eurasian oystercatcher (Haematopus ostralegus) and possibly razorbill (Alca torda). European shag (Phalacrocorax aristotelis) and great cormorant (Phalacrocorax carbo) were also on the island during a visit by West Cornwall Ringing Group on 16 June 2015.

A visit by National Trust rangers in 2019 found the island littered with thousands of elastic bands. It is thought that the gulls mistake the bands for food while feeding in fields on the mainland and are later regurgitated by birds roosting on the island. Small bundles of twine and green fishing net was also found along with a dead gull with a 10 cm fishing hook.

Before the First World War the Mullion pilchard seine companies posted a huer (a lookout) on the island to watch for the dark patch of a nearby shoal of pilchards. The island was previously owned by the Lords Robartes of Lanhydrock who sold it to the Meyer family during the 1920s. The Meyers gave it to the National Trust in 1945.

The island was used for location shots for the 2015 television serial And Then There Were None, based on a novel by Agatha Christie.

All content from Kiddle encyclopedia articles (including the article images and facts) can be freely used under Attribution-ShareAlike license, unless stated otherwise. Cite this article:
Mullion Island Facts for Kids. Kiddle Encyclopedia.