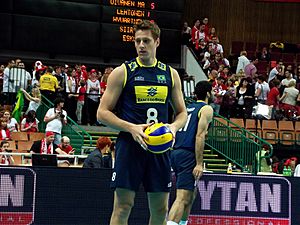 Murilo Endres (born 3 May 1981) is a Brazilian volleyball player. He is a member of Brazilian men's national team and Brazilian club SESI São Paulo. He has won two silver medals at the Olympic Games, in Beijing 2008 and London 2012. He also competed in the World Championships in 2006 and 2010, and won a silver medal in 2014. He has also competed in the World League, South American Championship, World Cup and the Grand Champions Cup.

All content from Kiddle encyclopedia articles (including the article images and facts) can be freely used under Attribution-ShareAlike license, unless stated otherwise. Cite this article:
Murilo Endres Facts for Kids. Kiddle Encyclopedia.