Muscle Shoals Sound Studio is a recording studio in Sheffield, Alabama formed in 1969 by four session musicians called The Muscle Shoals Rhythm Section (and affectionately called The Swampers) who had left Rick Hall's nearby FAME Studios in Muscle Shoals to create their own recording facility. The group closed the Jackson Highway studio in 1979, moving the operation to 1000 Alabama Avenue. The old studio has been listed on the National Register of Historic Places since June 2006. The studio, which is at 3614 Jackson Highway, was partly restored in the early 2000s and sold to the Muscle Shoals Music Foundation in 2013. This group completed a major restoration and the location reopened on January 9, 2017. The Alabama Avenue location ceased operations in 2005 when it was sold to a record label.

The concrete block building at 3614 Jackson Highway in Sheffield was built around 1946 and was previously a coffin showroom. It was converted to a recording studio in 1969 when a group of musicians called the Muscle Shoals Rhythm Section decided to start their own operation in competition with the FAME Studios owned by Rick Hall. Over the years, artists who recorded at Muscle Shoals Sound Studio included The Rolling Stones, Aretha Franklin, George Michael, Wilson Pickett, Willie Nelson, Lynyrd Skynyrd, Joe Cocker, Levon Helm, Paul Simon, Bob Seger, Rod Stewart, Tamiko Jones, and Cat Stevens. Cher's sixth album was titled 3614 Jackson Highway (1969) and this became the informal name for the studio in 1969. The studio at this location closed in 1979, and the recording facility was moved to new premises at 1000 Alabama Avenue.

The Jackson Highway building had been partly restored and open for tours in 2013 when the documentary Muscle Shoals raised public interest in a major restoration of the studio. had significant influence. "The financial support from Beats is a direct result of their film." Additional donations were made by other groups and individuals.

As recently as August 2015, tours were visiting the partly restored studio on Jackson Highway. It was closed when major restoration work started in September 2015. Muscle Shoals Sound Studio reopened as a finished tourist attraction on January 9, 2017, owned and operated by the foundation. The interior is reminiscent of the 1970s, with relevant recording equipment and paraphernalia. There are plans to allow artists to record in the studio.

The Alabama Tourism Department named Muscle Shoals Sound Studio as the state's top attraction in 2017, even before the Jackson Highway studio reopened.

The four founders of the studio, Barry Beckett (keyboards), Roger Hawkins (drums), Jimmy Johnson (guitar) and David Hood (bass), affectionately called The Swampers, but usually known as the Muscle Shoals Rhythm Section, were one of the best-known "house bands" or session musicians. (The nickname "The Swampers" was given to the group by the music producer Denny Cordell during recording sessions for Leon Russell because of their "funky, soulful Southern "swamp" sound".) They are referred to as "The Swampers" in the lyrics of "Sweet Home Alabama" (1974) by Lynyrd Skynyrd and appear on the cover of Cher's 1969 album 3614 Jackson Highway.

Initially they worked for Rick Hall, the founder of FAME Studios and they are recognized as having crafted the "Muscle Shoals sound" in conjunction with Hall. After leaving Rick Hall's FAME Studios, the four musicians partnered with Jerry Wexler who provided start-up funding to found Muscle Shoals Sound Studio at 3614 Jackson Highway in Sheffield. The first hit to the studio's credit was R. B. Greaves' "Take a Letter Maria". By December 1969, the Rolling Stones were recording at this new location for three days.

The Muscle Shoals Rhythm Section was the first group of musicians to own a studio and to eventually run their own publishing and production companies. They provided musical backing and arrangements for many recordings, including major hits by Wilson Pickett, Aretha Franklin, and the Staple Singers; a wide range of artists in popular music also recorded hit songs and complete albums at the studio. They had first worked together in 1967 and initially played sessions in New York and Nashville before doing so at FAME. Their initial successes in soul and R&B led to more mainstream rock and pop performers who began coming to record at Muscle Shoals Sound Studios, including the Rolling Stones, Traffic, Bob Seger, Elton John, Boz Scaggs, Willie Nelson, Paul Simon, Bob Dylan, Dr. Hook, Elkie Brooks, Millie Jackson, Julian Lennon, and Glenn Frey. 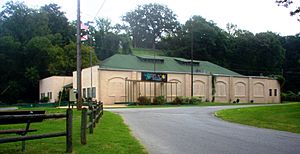 The new facilities, now the home of Cypress Moon Studios

The studio at 3614 Jackson Highway closed in April 1979, becoming an audio visual retailer and then an appliance store until 1999. The subsequent owner did some renovations and retained the old recording equipment, allowing for tours of the property.

The recording facility was relocated to updated and larger premises at 1000 Alabama Avenue in Sheffield in 1979. This location operated until it was closed and sold in 1985 to Tommy Couch's soul and blues label Malaco Records, based in Jackson, Mississippi, which also bought the publishing rights held by the Muscle Shoals Sound. Malaco used the Sheffield studios for its own artists, including Johnnie Taylor, Bobby Bland and Little Milton, as while continuing to operate its own facility in Jackson. The Rhythm Section, minus Beckett, worked with other studio musicians at Malaco Records and at other studios.

After the 1000 Alabama Avenue location closed in 2005, ending the Muscle Shoals Sound Studio era, the building was taken over by a movie production company. In 2007, this location housed Cypress Moon Productions and the Cypress Moon Studio with functioning recording equipment, which was operating as a recording studio and was open for tours.

Although it was no longer a working studio in 2009 and 2010, the Jackson Highway location was rented for recording some or all of two Grammy-nominated albums. Band of Horses's third CD, Infinite Arms, recorded in part at that studio, was nominated for a Grammy Award in the category Best Alternative Album.

Ten tracks of Black Keys's sixth album, Brothers, were also recorded at 3614 Jackson Highway. The album was nominated for a 2011 Grammy Award for Best Alternative Music Album. Two songs from the album, "Tighten Up" and "Black Mud", were nominated for Grammys: "Tighten Up" for Best Rock Performance by a Duo or Group with Vocal and Best Rock Song and "Black Mud" for Best Rock Instrumental Performance. Rolling Stone magazine placed the album at number-2 on its list of the Best Albums of 2010 and "Everlasting Light" at number 11 on its list of the Best Singles of 2010. The album was also featured on Spin magazine's Top 40 Albums of 2010.

The four members of the Muscle Shoals Rhythm Section who had founded the Sound Studio were inducted into the Nashville-based Musicians Hall of Fame in 2008 and into the Alabama Music Hall of Fame in 1995, "as four of the finest studio musicians in the world", also receiving the Lifework Award in 2008. They had appeared on "more than 500 recordings, including 75 gold and platinum hits".

The studio is open for tours Tuesday - Saturday. Over 62,000 people from 50 countries and every state in the U.S. have visited since it opened for tours again in 2013. The studio is a working recording studio at night. Dan Auerbach of the Black Keys did a solo project in March 2017. Grammy winning producer Dave Cobb of Nashville recorded rockers Rival Sons in April 2017. Actor Kiefer Sutherland recorded, along with Swamper David Hood, in May 2017. In 2018, Bishop Gunn released the first recording from the studio after the restoration, "Shine" from their album, Natchez. Donnie Fritz recently released tunes recorded at MSS on his June album, in conjunction with John Paul White and Single Lock Records.

The original studio building on Jackson Highway was listed on the National Register of Historic Places in June 2006. In June 2013, the building was sold to the Muscle Shoals Music Foundation whose goal was to establish a music museum in the historic building. The foundation extensively restored the building and the studio. It was reopened as a tourist attraction, with plans for recording as well, on January 9, 2017.

According to a journalist who was a recent visitor, the restored studio is impressive: "Muscle Shoals Sound's interior appears much as it did in its prime. ... Some guitars and amps. A Hammond organ, Wurlitzer electric piano and black baby grand. The control room with recording console and analog tape machine ... There are isolation booths, for vocals, percussion and such..."

All content from Kiddle encyclopedia articles (including the article images and facts) can be freely used under Attribution-ShareAlike license, unless stated otherwise. Cite this article:
Muscle Shoals Sound Studio Facts for Kids. Kiddle Encyclopedia.