Museum of Transportation facts for kids

The National Museum of Transportation (NMOT) is a private, 42-acre transportation museum in the Kirkwood suburb of St. Louis, Missouri. Founded in 1944, it restores, preserves, and displays a wide variety of vehicles spanning 15 decades of American history: cars, boats, aircraft, and in particular, locomotives and railroad equipment from around the United States. The museum is also home to a research library of transportation-related memorabilia and documents.

At the southwest corner of the property is West Barretts Tunnel. Built in 1853, it is one of a pair of tunnels that were the first to operate west of the Mississippi River. It was added to the National Register of Historic Places in 1978.

The museum has its own railway spur to an active main line formerly owned by the Missouri Pacific Railroad, now by the Union Pacific Railroad. This has allowed the museum to take possession of large and unusual pieces of railroad equipment. A miniature railroad operates around a loop of track near the parking lot and a full-sized restored trolley operates Thursday–Sunday from April through October. 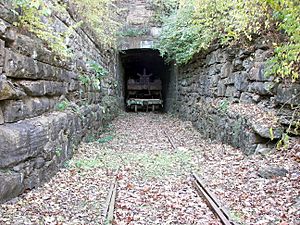 The museum's grounds include Barretts Tunnel, one of the first railroad tunnels west of the Mississippi River.

Among its railroad items are:

The engine compartment of a 1963 Chrysler Turbine Car displayed inside the museum.

On display are a Missouri River towboat and two airplanes, a C-47 Skytrain at the main gate and a T-33 Shooting Star.

All content from Kiddle encyclopedia articles (including the article images and facts) can be freely used under Attribution-ShareAlike license, unless stated otherwise. Cite this article:
Museum of Transportation Facts for Kids. Kiddle Encyclopedia.