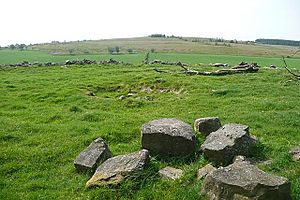 Looking up towards the summit

Mynydd Epynt is an upland area of Mid Wales within the county of Powys, Wales. It is bounded to the south by the upper section of the valley of the River Usk and the Brecon Beacons National Park, to the north by the valley of the Afon Irfon, and to the east by the valley of the River Wye. Its western boundary is less distinct but lies eastward of the A483 Llandovery to Llanwrtyd Wells road. Its character is that of an extensive though dissected moorland plateau lying between 400 and 450m above sea level and whose highest point of 478m (1,568 ft) is reached at an unnamed rise at OS grid ref SN 961464. 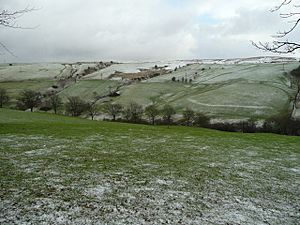 The south-western part of Mynydd Epynt is known as Mynydd Bwlch-y-groes. The area is drained by several southward-flowing rivers which empty into the River Usk. These include (from west to east) the Cilieni, Nant Bran, Afon Ysgir (with its two headwaters the Ysgir Fechan and Ysgir Fawr) and Afon Honddu. The Duhonw drains north-eastward into the River Wye. The highest point is a Marilyn (having topographic prominence of at least 150m).

The Welsh-language name means mountain (crossed by a) horse-path. It can be spelled as Mynydd Eppynt. In earlier times it was known simply as Epynt and is commonly referred to today as the Epynt.

Musician Gruff Rhys has a song called 'Epynt' after the mountain, which features on his first solo album Yr Atal Genhedlaeth. Also the song context is about money, with the 'E' standing for the Euro, and 'pynt' sounding similar to the Welsh word for Pound.

Mynydd Epynt is largely formed from the Raglan Mudstone Formation and the St Maughans Formation of the Old Red Sandstone laid down during the latest part of the Silurian period and the succeeding Devonian period though there is little in the way of rock exposures at the surface. The northern and western escarpment of Mynydd Epynt is formed from a suite of rocks assigned to the Ludlow stage of the late Silurian and which include the Temeside Mudstone, the Tilestones, the Cae'r Mynach, Fibua, Aberedw, Cwm Craig Ddu and Irfon Formations. These consist variously of sandstones, mudstones and siltstones.

There is a broken spread of glacial till across the area resulting from its inundation by ice from the mid Wales ice sheet to the north during the ice ages and hill peat has accumulated in some areas in post-glacial times. 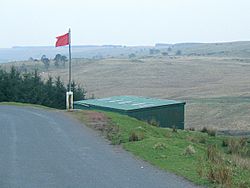 The Ministry of Defence acquired several thousand acres of Mynydd Epynt in 1939. This now forms the core of the Sennybridge Training Area (SENTA). It is one of the largest military training zones in the UK and is of restricted access owing to the use of live ammunition and explosives. Unsurprisingly this move was a controversial one, not least for those people who were required to vacate their land. The families who left Mynydd Epynt in 1939 were not given any compensation.

The core area of Mynydd Epynt is used by the MOD as a military training area and artillery range. There is therefore little access across this land. Outlying areas are mapped as Open Country or open access land and therefore available to hill-walkers to wander at will. The MOD have as of 2004 however established a trail, the Epynt Way, around the perimeter of the range which caters for walkers, horse riders and mountain-bikers. A visitor centre has been established by Defence Estates at Disgwylfa, north of Upper Chapel beside the B4519 road from Brecon to Garth. Originally established as an interpretive facility in the 1990s, this one-time farmhouse has been refurbished and re-opened in 2009 as 'Canolfan Epynt' (the 'Epynt Centre'). It was chosen as a special stage in the British Rally from 2006 to 2008. 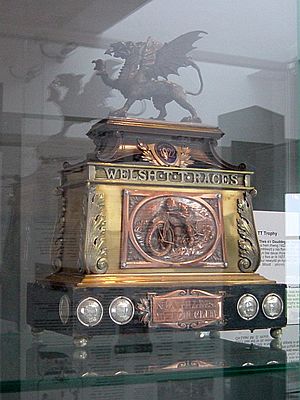 From 1948 to 1953 the area was used for yearly motorcycle road racing. Announced at the Motorcycle Live show in late 2017, a new organisation – Welsh Road Race – proposed to once again organise road racing, based on a repeal of certain clauses within the UK Road Traffic Act regulations, which previously banned racing on public roads in the UK. The Secretary of State for Defence granted the organisers a licence to again use a 5.25 mi (8.45 km) circuit based on a network of private tarmacced roads contained within the Crown Estate, as was previously used to stage the historic Eppynt Motor Cycle Road Races.

Due to unforeseen circumstances, the anticipated return of road racing to this area in August 2018 was cancelled in early February 2018 due to difficulties with the Welsh Road Traffic regulations and time-frame considered as too-short for the ACU-sanctioned event, and it was postponed until 2019. Unlike the Isle of Man TT races which are free to attend, the organisers had already started to sell admission tickets via their website for the multi-category event based on a long-weekend.

The organisers include racer Jenny Tinmouth and former racer and TT rider Steve Plater who also acts as a consultant development rider to Norton Motorcycles for their new V4 RR machine.

All content from Kiddle encyclopedia articles (including the article images and facts) can be freely used under Attribution-ShareAlike license, unless stated otherwise. Cite this article:
Mynydd Epynt Facts for Kids. Kiddle Encyclopedia.