Nagavara Ramarao Narayana Murthy (born 20 August 1946) is an Indian billionaire businessman. He is the founder of Infosys, and has been the chairman, chief executive officer (CEO), president, and chief mentor of the company before retiring and taking the title chairman emeritus.

Murthy was born and raised in Shidlaghatta, Karnataka. He graduated from National Institute of Engineering, University of Mysore with a bachelor's degree in electrical engineering and a master's degree from the Indian Institute of Technology Kanpur.

Before starting Infosys, Murthy worked at Indian Institute of Management Ahmedabad as the chief systems programmer, and Patni Computer Systems in Pune (Maharashtra). He started Infosys in 1981 and was the CEO from 1981 to 2002 as well as the chairman from 2002 to 2011. In 2011, he stepped down from the board and became the chairman emeritus. In June 2013, Murthy was appointed as the executive chairman for a period of five years.

Murthy has been listed among the 12 greatest entrepreneurs of our time by Fortune magazine. He has been described as the "father of the Indian IT sector" by Time magazine and CNBC for his contribution to outsourcing in India. Murthy has been honoured with the Padma Vibhushan and Padma Shri awards. He is the father-in-law of Rishi Sunak, a British MP and the current Chancellor of the Exchequer.

Narayana Murthy was born on 20 August 1946 in Shidlaghatta, Chikkaballapura district, Karnataka into a middle-class Brahmin family. After completing his school education, he went to the National Institute of Engineering and graduated in 1967 with a degree in Electrical Engineering. In 1969 he received his master's degree from the Indian Institute of Technology Kanpur.

Murthy first served as a Research Associate under a faculty at IIM Ahmedabad and then later served as the chief systems programmer. There he worked on India's first time-sharing computer system and designed and implemented a BASIC interpreter for Electronics Corporation of India Limited. He started a company named Softronics. When that company failed after about a year and a half, he joined Patni Computer Systems in Pune.

A bitter experience on a train in 1974 in Niš, a border town between what is now Serbia and Bulgaria, turned N R Narayana Murthy into a "compassionate capitalist" from a "confused leftist", leading him to create Infosys. Murthy and his six software professionals founded Infosys in 1981 with an initial capital investment of Rs 10,000, which was provided by his wife Sudha Murthy. Murthy served as the CEO of Infosys for 21 years from 1981 to 2002 and was succeeded by co-founder Nandan Nilekani. At Infosys he articulated, designed and implemented the Global Delivery Model for IT services outsourcing from India. He was the chairman of the board from 2002 to 2006, after which he also became the Chief Mentor. In August 2011, he retired from the company, taking the title chairman Emeritus. 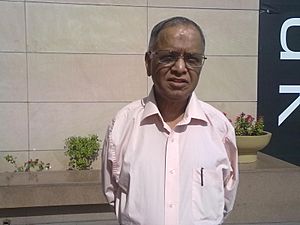 Murthy serves as an independent director on the corporate board of HSBC and has served as a director on the boards of DBS Bank, Unilever, ICICI and NDTV. He also serves as a member of the advisory boards and councils of several educational and philanthropic institutions, including Cornell University, INSEAD, ESSEC, Ford Foundation, the UN Foundation, the Indo-British Partnership, Asian Institute of Management, a trustee of the Infosys Prize, a trustee of the Institute for Advanced Study in Princeton, and as a trustee of the Rhodes Trust. He is also the Chairman of the Governing board of Public Health Foundation of India. He serves on the Asia Pacific Advisory Board of British Telecommunications. In 2005 he co-chaired the World Economic Forum in Davos.

Murthy also serves on the strategic board which advises the national law firm, Cyril Amarchand Mangaldas, on strategic, policy and governance issues. He is also a member of IESE's International Advisory Board (IAB).

In 2016, Murthy spoke with Harvard Business Review Ascend on the subject of "How To Be a Better Manager", where he shared tips that he has learned from his own life.

In 2017, Murthy raised concerns over alleged corporate governance lapses at Infosys, however the company went on to deny these claims.

His wife, Sudha Murthy, is a social worker and author, and does philanthropic work through the Infosys Foundation.

Murthy has two children, a son Rohan Murty and a daughter Akshata Murthy. In June 2013, Rohan joined Infosys as an executive assistant to his father. He left Infosys in June 2014. In 2009, Akshata married Rishi Sunak; the UK's Chancellor of the Exchequer and Conservative MP for Richmond, Yorkshire. 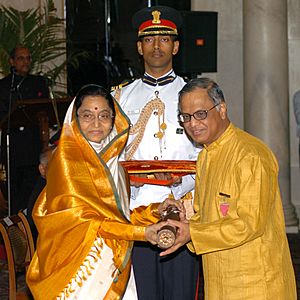 All content from Kiddle encyclopedia articles (including the article images and facts) can be freely used under Attribution-ShareAlike license, unless stated otherwise. Cite this article:
N. R. Narayana Murthy Facts for Kids. Kiddle Encyclopedia.