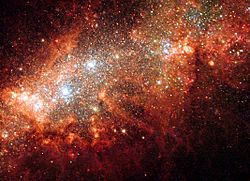 Centre of NGC 1569 as imaged by the Hubble Space Telescope. Note at centre left the two super star clusters

NGC 1569 is a dwarf irregular galaxy in Camelopardalis. This faint galaxy is well studied by professional astronomers, who are interested in the history of star formation in the galaxy. The galaxy is relatively nearby, so the Hubble Space Telescope can easily pick out its stars. In 2008 scientists studying images from Hubble calculated the galaxy's distance at nearly 11 million light-years away, making it a member of the IC 342 group of galaxies.

The most notable feature of NGC 1569 is its powerful starburst. It has formed stars at a rate 100 times greater than that of our galaxy during the last 100 million years. It contains two prominent super star clusters with different histories.

Super star cluster B, near the center of the galaxy, has older red giants and red supergiants.

Both of these star clusters have masses similar to the globular clusters in the Milky Way. Many smaller star clusters are relatively young (between 2 million years and 1 billion years. They are similar to small globular clusters or R136 in the Large Magellanic Cloud. This shows, with the results from other dwarf galaxies such as the Large Magellanic Cloud and NGC 1705, that star formation in dwarf galaxies does not occur continuously but instead occurs in a series of short bursts.

The many supernovae produced in the galaxy as well as the strong stellar winds of its stars have produced filaments and bubbles of ionized hydrogen with respective sizes of up to 3,700 and 380 light years. These shine as the light of the young stars contained within them hits the gas.

NGC 1569's starburst may have been triggered by interactions with other galaxies of the IC 342 group, probably a nearby cloud of hydrogen.

All content from Kiddle encyclopedia articles (including the article images and facts) can be freely used under Attribution-ShareAlike license, unless stated otherwise. Cite this article:
NGC 1569 Facts for Kids. Kiddle Encyclopedia.