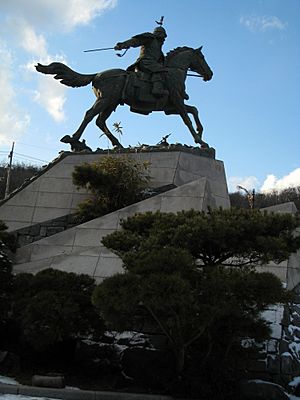 Nakseongdae is the birthplace of the famous Goryeo-Era general, Gang Gam-chan (강감찬, 姜邯贊 ; 948-1031). Legend says that when Gang Gam-chan was born, a star fell from Heaven. Because of this, his birthplace was named "Site of the Falling Star" (Nakseongdae).

The people of the Goryeo Kingdom (918-1392) built a three-story pagoda at the house of Gang Gam-chan's birth to praise him for his great deeds. He is famous for defeating 400,000 invading Khitan soldiers. Damaged parts of this pagoda were rebuilt by the Seoul Metropolitan Government in 1964, and the pagoda was named Seoul Tangible Cultural Property No. 4 in 1972. Two years later, a shrine was built for Gang Gam-chan. The pagoda, which was originally located at 218 Bongcheon-dong, was moved to be with the shrine.

All content from Kiddle encyclopedia articles (including the article images and facts) can be freely used under Attribution-ShareAlike license, unless stated otherwise. Cite this article:
Nakseongdae Facts for Kids. Kiddle Encyclopedia.