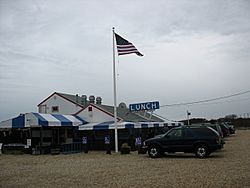 Lunch at the Lobster Roll restaurant in Napeague

Napeague (/ˈnæpiːɡ/, NAP-eeg) is a census-designated place (CDP) that roughly corresponds to the hamlet with the same name in the Town of East Hampton in Suffolk County, New York, United States. The CDP population was 200 at the 2010 census.

Napeague is located on a very narrow, low-lying strip between the Atlantic Ocean to the south and Gardiners Bay to the north that was flooded in the Great Hurricane of 1938. It lies between Napeague State Park on the west and Hither Hills State Park on the east.

Napeague derives its name from the Montaukett name for "land overflowed by the sea".

The hamlet's three major landmarks are the Mackay Radio Tower, the Art Barge, and the Smith Meal Fish Factory.

The Mackay Radio Tower is the last of two towers (originally 300 feet (91 m) high and 1,000 feet (300 m) apart) that were used to transmit international point-to-point radio communications starting in 1927. At the height of World War II the tower was used for responding to upwards of ten SOS calls a day from ships at sea. The tower had somebody on site 24 hours a day, but the actual transmissions were keyed from Southampton. The towers toppled during the Great 1938 Hurricane.

At 12:35 pm. on January 28, 1961, an American Airlines Boeing 707 Flight 1502 (Flagship Oklahoma) with an engine on fire nosedived over the towers before crashing about 300 yards (270 m) off the Napeague coast, killing all six aboard. The plane had been on a training flight from Idlewild Airport. An often repeated story says the plane clipped one of the towers, but The New York Times account of the crash says it just missed the towers.

The Mackay towers were decommissioned in 1984, and its underlying land is now part of Napeague State Park. One of the towers was torn down. The remaining tower is used for communication purposes by the New York State Police. Its flashing white lights are visible throughout coastal areas of East Hampton.

The Art Barge is the home of the Victor D'Amico Institute of Art. Victor D'Amico was Director of Education for the Museum of Modern Art from 1937 until 1970. In 1955 the Department had begun art classes at Ashawagh Hall in Springs, New York. D'Amico, looking for a permanent home, worked with local baymen to dock a barge at its current location just northeast of the Mackay Towers. It was originally called Kearsarge, a Native American word meaning "place of heaven". However, the popular name of "Art Barge" stuck. A second story was added later. The barge now operates June through September.

The large shed of the Smith Meal Fish Factory in Promised Land was a plant that processed menhaden fish for fish meal. It was owned by Otis Smith and produced 20–30 million fish a year from June to October and had its own Long Island Rail Road siding. After a drop in the supply of menhaden, Smith closed the plant in 1969 along with plants at Lewes, Delaware, and Crab Island, New Jersey. The plants were consolidated at Port Monmouth, New Jersey. Next to the Smith meal plant is a private marine finfish hatchery, Multi Aquaculture Systems, founded in 1976 by Dr. Robert J. Valenti, and a small restaurant, the Sea Slug Lounge.

The closed Smith Meal Fish Factory was sold to The Nature Conservancy, who transferred it to the State Parks Commission. Napeague State Park was the subject of an ongoing court battle about whether it should be used as a dock for the Cross Sound Ferry for a car ferry service to New London, Connecticut. The park has been undeveloped since its transfer in 1986 and is home to a nesting colony of piping plover which will dictate its future use.

At the end of the last ice age, Napeague was submerged under the sea. (At that time, Montauk was an island.) In the intervening several thousand years, ocean currents, or littoral drift, filled in this space with sand, giving rise to Napeague.

The main settlement in Napeague is the small community of Lazy Point, also known as "Promised Land". It acquired this nickname, according to local lore, because of the menhaden plant located there in years gone by, which "stunk to high heaven".

There were 105 households out of which 17.1% had children under the age of 18 living with them, 46.7% were married couples living together, 10.5% had a female householder with no husband present, and 39.0% were non-families. 33.3% of all households were made up of individuals and 10.5% had someone living alone who was 65 years of age or older. The average household size was 2.12 and the average family size was 2.59.

All content from Kiddle encyclopedia articles (including the article images and facts) can be freely used under Attribution-ShareAlike license, unless stated otherwise. Cite this article:
Napeague, New York Facts for Kids. Kiddle Encyclopedia.