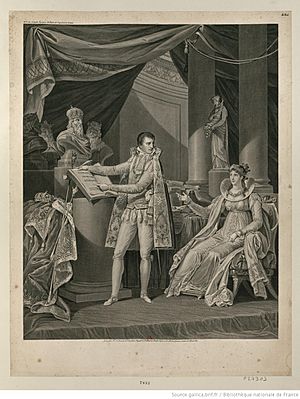 Presenting the Code to Empress Josephine 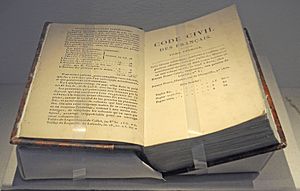 The Code Napoleon exposed in a museum in Speyer, Germany.

The Napoleonic Code ‒ or Code Napoléon, officially the Code civil des Français ‒ is the French civil code established under Napoléon I in 1804. Four judges wrote the Code for Napoleon, to replace the many different kinds of law in different places. It did not allow privileges based on birth (such as nobility). It allowed freedom of religion. It also set up a system of Civil service where government jobs would go to the most qualified.

Due to the Napoleonic Wars the Napoleonic code became an influence on most of Europe. In particular, it influenced countries such as Italy, Spain, Portugal, Latin American countries, the province of Quebec and the state of Louisiana in the United States. It influenced all other former French colonies which base their civil law systems on the Napoleonic Code. The code of 1804:

All content from Kiddle encyclopedia articles (including the article images and facts) can be freely used under Attribution-ShareAlike license, unless stated otherwise. Cite this article:
Napoleonic Code Facts for Kids. Kiddle Encyclopedia.