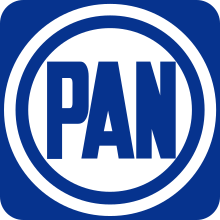 The National Action Party (Spanish: Partido Acción Nacional, PAN), founded in 1939. It is one of the three main political parties in Mexico. It has been an important political party winning local, state, and national elections. It is the most conservative party.

In 2000, PAN candidate Vicente Fox was elected President for a six-year term; in 2006, PAN candidate Felipe Calderón replaced Fox in presidency. During the period 2000-2012, both houses of the legislature had PAN pluralities, but the party did not have a majority in either house of the Congress.

All content from Kiddle encyclopedia articles (including the article images and facts) can be freely used under Attribution-ShareAlike license, unless stated otherwise. Cite this article:
National Action Party (Mexico) Facts for Kids. Kiddle Encyclopedia.