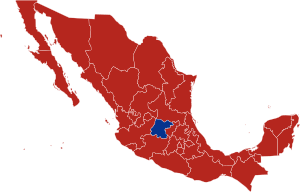 General elections were held in Mexico on 1 July 2018. Voters elected a new president to serve a term of five years and ten months.

It was one of the largest election days in Mexican history, with most of the nation's states holding state and local elections on the same day, including nine governorships. It has been the most violent campaign Mexico has experienced in recent history, with 130 political figures killed since September 2017.

During the election cycle, Andrés Manuel López Obrador was the leading candidate and would eventually win in a landslide victory.

Currently, the results are: López Obrador, 53%; Anaya, 23%; Meade, 16%; and Rodríguez Calderón, 5%. This is the first time since the (controversial) 1988 election that a presidential candidate has been elected with an absolute majority (50%+1) of the votes cast.

All content from Kiddle encyclopedia articles (including the article images and facts) can be freely used under Attribution-ShareAlike license, unless stated otherwise. Cite this article:
2018 Mexican general election Facts for Kids. Kiddle Encyclopedia.