Every year more than 500,000 attendees enjoy the National Cherry Festival, which has completed 93 years. Families can enjoy many kinds of activities from cherry pit spitting and pie eating contests, to the Grand Royale Parade in which the newly crowned Cherry Queen greets the crowds. There is also a Junior Royale parade for children and a Festival Airshow, including periodic visits from the Blue Angels. In addition to the National Cherry Festival, there are a number of other cherry festivals celebrated around the United States. 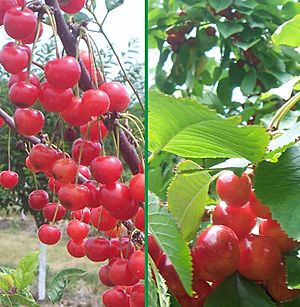 Originally held in mid- to late July to coincide with the cherry harvest, the Festival was moved to early July to take advantage of the July 4th holiday.

In 2020, Festival Officials announced on Thursday, April 16, 2020 that the 94th National Cherry Festival will be postponed until the following year; July 3rd - July 10th 2021. This postponement is in light of recent global health concerns regarding the COVID-19 pandemic. At the time of announcement, the State of Michigan had 28,059 confirmed cases of COVID-19, 1,921 COVID-19 related deaths, 17 confirmed cases were in Grand Traverse County, Michigan and 3 deaths.

Previously, the only time the festival had been canceled was from 1942 through 1945 due to World War II.

All content from Kiddle encyclopedia articles (including the article images and facts) can be freely used under Attribution-ShareAlike license, unless stated otherwise. Cite this article:
National Cherry Festival Facts for Kids. Kiddle Encyclopedia.