The National Marine Aquarium, located in Britain’s Ocean City Plymouth is the largest Aquarium in the UK. Home to over 4,000 animals and groundbreaking Ocean conservation work. Offering a variety of immersive and engaging opportunities to learn about the marine environment through ocean education for all ages.

From sharks, turtles, and jellyfish to the cast of Finding Nemo, the aquarium has everything for a perfect underwater day out. It even features its very own Australian-inspired Great Barrier Reef! A 650,000-litre exhibit showcasing some of the most colourful fish found in the Ocean – this is not to be missed.

The National Marine Aquarium is proud to be the home of the Ocean Conservation Trust, a charity dedicated to connecting people with the Ocean.

The marine aquarium located in Sutton Harbour, next to the Barbican and fishmarket. It was opened in May 1998, with charitable aims of research, education and conservation. It is a member of the British and Irish Association of Zoos and Aquariums (BIAZA). 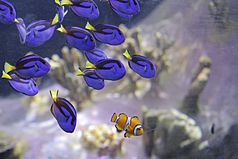 The Aquarium is divided into four main zones: Plymouth Sound, British Coasts, Atlantic Ocean and Blue Planet. A visit to the aquarium goes from the local waters of Plymouth to the Great Barrier Reef of Australia.

This zone displays marine life found around Plymouth. It concentrates on the surprising range of habitats found around the city. There are 17 tanks (which include a rock pool and a wave tank) are home to approximately 80 species of fish and invertebrates; including local sharks, rays, seahorse and octopus.

The second exhibit is the largest native offering in Britain. As visitors move on to the coasts of Britain, they can discover the potential of renewable energy from our Oceans. This zone houses life-size models of whales and dolphins located around Britain. The large Eddystone tank displays an array of creatures found on the Eddystone reef, 19 km south of Plymouth. Through a huge window, visitors can see conger eels, mullet(fish), pollack, bream, and smooth hound sharks swimming in the open water, flatfish and rays hiding on the seabed, and lobsters and crabs hiding in the rocks.

This zone contains various areas within, including 'Ocean Drifters', 'Ocean Lab', 'Observation Deck', 'Lost at Sea' and 'Ocean Predators' The 'Ocean Drifters' jelly exhibit was opened in 2009, and includes moon jellies, Japanese sea nettles, and Upside-down jellyfish, housed in round tanks to prevent damage to their delicate bodies. The other areas take you around the largest tank of the aquarium housing 1,000 Caribbean fish including nurse shark, lemon shark, sand tiger shark, zebra shark, sandbar shark, barracuda, southern stingray, tarpon, turtle. The tank volume is 2.5 million litres. This exhibit was updated at the end of 2009, with the largest ever shipment of live fish into the UK, from Barbados, West Indies. It was updated again in 2015/16 with the addition of Lemon and sand-tiger sharks.

The Laboratory allows you to see what life is like working behind the scenes at the aquarium. Biologists can be seen taking care of the younger generation of species being bred and cared for before entering the main exhibits. This process is the most important moment for the species, as they grow and are placed into an ecosystems suited to their natural lifestyle

This zone includes 'Biozone' and the 'Great Barrier Reef'. Biozone showcases the amazing biodiversity found in the world's oceans and displays longhorn cowfish, lionfish, Giant Pacific Octopus Enteroctopus dofleini and seahorses. The Great Barrier Reef exhibit is the grand finale of the visit. The second largest tank at 700,000 litres, and by far the most colourful, the reef is home to over 70 species of fish. It also was the home of the loggerhead sea turtle, Snorkel, who was with the aquarium from 1990 to 2016.

The National Marine Aquarium is a dedicated charity that drives marine conservation through engagement. They led a project to sink frigate HMS Scylla in 2004 to create an artificial reef in Whitsand Bay, Cornwall. It is the lead partner in Just Add H2O, a schools learning centre. Which also offers outreach programs based around the National Curriculum teaching 30,000 school children each year. Through National Marine Aquarium grants smaller charities can further help with driving marine conservation.

All content from Kiddle encyclopedia articles (including the article images and facts) can be freely used under Attribution-ShareAlike license, unless stated otherwise. Cite this article:
National Marine Aquarium, Plymouth Facts for Kids. Kiddle Encyclopedia.