The National Railway Museum, Port Adelaide, South Australia, is Australia's largest railway museum with over 100 exhibits on display, primarily from the Commonwealth and South Australian Railways. First opening its doors in 1970, the Museum moved to its larger and current premises in 1988. 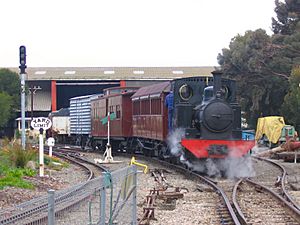 In 1963 a group of rail preservationists convinced the South Australian Railways Commissioner to allocate land on the site of the former Mile End Roundhouse to house a small collection of withdrawn steam locomotives. The first locomotive arrived on 24 August 1964, with the Mile End Railway Museum officially opened on 5 December 1970. The original site had only a small number of exhibits under cover with most items housed on the site in the open air. The effects of weather took their toll on the exhibits, so an alternative undercover venue was sought.

In 1987 the museum obtained a $2m Australia's Bicentennial Commemorative Grant to redevelop the former Port Dock goods terminal as a new under cover museum. On 2 January 1988 the Mile End Railway Museum closed and on 10 December 1988, the Port Dock Station Railway Museum was officially opened by the Premier of South Australia, John Bannon.

In 1999, funding was received as part of Australia's Centenary of Federation to construct the Commonwealth Railway Museum within the museum's precinct. This new facility, which was opened on 21 October 2001, houses a representative sample of exhibits from the Commonwealth Railways and Australian National. Included are vehicles from The Ghan, Tea & Sugar and Trans-Australian. At the same time, the Port Dock Station Railway Museum was renamed the National Railway Museum.

In May 2009 the main pavilion was named after Ron Fitch, who as South Australian Railways Commissioner had facilitated the transfer much of the museum's early rolling stock. At the same time, the Commonwealth Railways Museum was renamed the Ronald E Fluck Pavilion, after the museum's founder.

In June 2017, the state government released plans to construct a brand new railway station for a Port Dock spur line, in Baker street, adjacent to the museum. The new station would have service future residents living in the Dock One development which started construction in 2020. However, in June 2019, the project was called off, and the preliminary works were undone in January 2020. 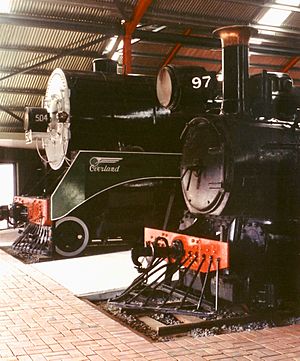 The museum houses its large static collection in two pavilions and the historical goods shed at the site of the original Port Dock railway station. On the site, all three gauges of Australia are represented, these being Narrow (3 ft 6 in or 1,067 mm), Standard (4 ft 8 1⁄2 in or 1,435 mm) and Broad Gauge (5 ft 3 in or 1,600 mm). The collection comprise over 100 exhibits primarily from the Commonwealth and South Australian Railways. It also has rolling stock from the Silverton Tramway and Victorian Railways.

In June 2020, the Museum announced that locomotive 843 had been donated by One Rail Australia. Transfer is expected later this year. 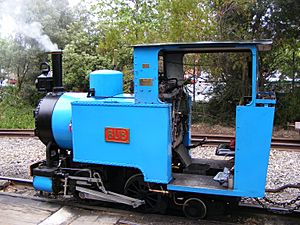 The museum operates a number of historic locomotives for shunting purposes and special events where large passenger numbers are applicable, in lieu of this, the 18 in (457 mm) gauge steam locomotives and a diesel operate rides of 1.2 km around the museum. In 1992, the museum, in co-operation with the local council, built a 2 km line along the beach from Semaphore to Fort Glanville. This is operated from October to April, weekends, public holidays and school holidays when temperatures are below 35 degrees Celsius (95 °F). The line travels along the coastline, through the sand dunes and the Fort Glanville Conservation Park, with the engine being turned and run around at each end.

The Museum also publishes its own magazine, Catch Point, on alternate months. Published since 1982, it is a full colour 40 page magazine, and features news and articles on local railway operations.

The museum has a number of historic buildings, some original to the site and other transported for display, including:

The "Callington Shelter Shed and Booking Office" is typical of the type of building used by the South Australian Railways at small country stations. It was originally built in 1951 for the then small rural community of Callington, located approximately 20 kilometres west of Murray Bridge on the main Adelaide-Melbourne line. In 1991 an approach was made to Australian National, who agreed to sell the building. This resulted in the building being purchased by a museum member, who subsequently arranged for its donation and transportation to Port Adelaide. It was placed in storage until 1994, when it was re-erected in its current location.

Located at rear of the rollingstock pavilion is the former Eudunda Gang Shed. It was purchased and relocated by members of the museum in 1990.

The original 1878 Port Dock Station Goods Shed is included as part of the museum complex. This building is constructed of large timber beams and is typical of the type of buildings constructed by the South Australian Railway in the 19th Century. The Shed was added to the SA Heritage Register on 23 November 1989.

The Shed is historically significant as part of an important railway network linking Adelaide with its port. Its size and scale reflect the economic prosperity of South Australia in the 1870s when facilities at Port Adelaide were being extended to serve the growing import and export trade. Architecturally it is an austere industrial building, significant for its sheer scale and use of timber construction throughout. The Port Dock Station Goods Shed is the only intact building which remains of the Port Adelaide (later known as Port Dock) Station complex.

The National Railway Museum has an on-site railway station known as Jacketts Station. The station is used as a terminus station for Redhen railcars during special occasion trips between the museum and Adelaide railway station.

The shed (closed to public access) is where the Museum maintains its operating fleet of 457 mm gauge locomotives and a narrow gauge steam locomotive.

The former Woodville signal cabin of the South Australian Railways has been moved to the museum site and connected to the narrow gauge yard.

All content from Kiddle encyclopedia articles (including the article images and facts) can be freely used under Attribution-ShareAlike license, unless stated otherwise. Cite this article:
National Railway Museum, Port Adelaide Facts for Kids. Kiddle Encyclopedia.