Semaphore is a northwestern suburb of Adelaide in the Australian state of South Australia. It is located on the Gulf St Vincent coastline of the Lefevre Peninsula about 14 kilometres (8.7 mi) from the Adelaide city centre.

Semaphore is bounded to the north by Union and Hargrave Streets, to the south by Hart Street, to the west by Gulf St Vincent and to the east by Woolnough Road and Swan Terrace. Semaphore is primarily a residential suburb, although its seaside location makes it a popular local tourist destination, with numerous restaurants, takeaway food outlets and other tourism-oriented businesses. It is adjacent to Semaphore South, Glanville, Exeter and Largs Bay. The postcode for Semaphore is 5019.

Semaphore was first surveyed for sale in 1849, at which time it was isolated by swamps to the south and the Port River to the east. In 1851, George Coppin, a prominent publican, theatrical entrepreneur and actor, built a two-storeyed timber hotel on the southern corner of The Esplanade and Blackler Street. A very high flagpole was erected to signal to his "White Horse Cellars" hotel at Port Adelaide the approach of ships, earning the area the name Semaphore, often called "The Semaphore".

In 1856, an official government signal station was established at the intersection of The Esplanade and Semaphore Road, where officers would record the details of all vessels in Gulf St Vincent. It was also used to record information on water depth, tides and cargo loading. A Telegraph Office opened in 1856 and became a Post and Telegraph Office in March 1871. In 1875, the Time Ball Tower was erected adjacent to the Signal Station. The area was isolated from Port Adelaide by the Port River until 1859 when a wooden bridge, later replaced by the Jervois Bridge, was opened. The following year saw the construction of the jetty. The majority of early settlers in Semaphore were crewmen of boats.

The road link to Port Adelaide allowed for more convenient commuting from Semaphore to the commercial area, and contributed to increased residential development in the area, as well as churches, schools and pubs. This was further augmented by the construction in 1878 of a railway, which attracted affluent holiday-makers to the seaside. Carnivals, sideshows and open air cinemas were opened, and 1917 a tram service from Port Adelaide was built.

In the mid-1930s, the Great Depression brought a decline to Semaphore, with the tram service being closed down and the functions of the Signal Station and Time Ball Tower being moved to Outer Harbor, while the jetty was shortened due to storm damage, with repairs being unaffordable. 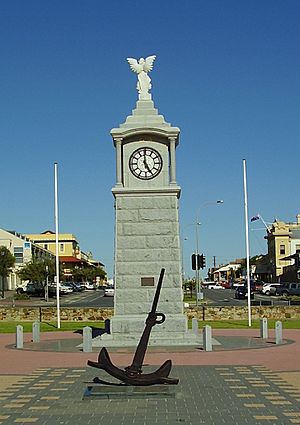 The Semaphore jetty, which was completed in 1860, once stood at 652 m (2,150 ft) in length, but today is 585 m (1,930 ft). It overlooks the Fort Glanville steam train, which operates as a heritage item by the National Railway Museum. A World War I memorial clock was built in 1925 at the landward end of the jetty. In 1928, a merry-go-round, the largest in Australia, was constructed, driven by an electrical lift motor and gearbox, unlike the predominantly steam-driven machines of the era. An octagonal brick tower with two metre thick walls was erected in Blackler Street in 1880 to maintain a water supply when the Jervois bridge had to be raised for passing ships. It was in use until 1972 after which it was converted into a residence. The birthplace of Sir Ross Smith, the aviator who flew from the United Kingdom to Australia is preserved to this day, at 36 Newman Street.

Semaphore's beach is the busiest of those on the LeFevre Peninsula, as it is the most convenient beach to people living in the northern suburbs of metropolitan Adelaide. There are large car parks on the foreshore to accommodate visitors. During weekends of the summer months the beach is patrolled by the Semaphore Surf Life Saving club, with the swimming flags often being placed 50m south of the jetty or outside the club at Point Malcolm (1.5 km south of the jetty).

The beach is wide, with a large amount of wide sand. The surf is low and good for swimming, but surfing is generally not possible. Sandbars extend out a considerable distance, with holes, troughs and channels in the bars creating the major safety hazard on a generally safe beach. Other substantial hazards on the beach are jumping from the jetty (the depth of the water under the jetty varies considerably during the day and between visits) and non-swimmers climbing on the groyne at Semaphore South finding themselves cut off from land by a rising tide. Both activities are illegal, which is pointed out by warding signs; nevertheless, both activities have claimed lives in past years.

Walking along the historic jetty is popular and the jetty is the focus of cultural events, such as the annual Kite Festival and Greek Festival.

Semaphore is served by the historic Semaphore Library, and a small cinema, the Odeon Star. There is a rather large number of elderly residents in the area, as evident from the four nursing homes in the suburb.

Semaphore Road contains a large number of retail stores. Some are aimed at the large number of summer visitors, with a large range of food vendors, clothing boutiques and gift retailers. Residents appreciate a butcher, bakery, fruit shop, post office, gym, newsagency, supermarkets, chemists and hairdressers. Semaphore also caters to the seaside attraction during the summer months, with Fish and Chips, Ice Cream, Coffee shops, a public playground that was redone in 2014, and the Semaphore Water slide Amusement Park, there is no wonder Semaphore Road was voted the People's Choice Award for best main street in South Australia for 2014.

Semaphore has a number of heritage-listed sites, including:

The Glanville railway station is nearby, with a service to the Adelaide CBD every 30 minutes every day.

Some limited short stay car parking is available along Semaphore Road. Larger long-stay carparks stretch along the foreshore, with access from The Esplanade. Most residential streets have on-street parking available for non-residents, although in the older areas of the suburb many residents park on the street as houses of the pre-car era lack off-street parking.

All content from Kiddle encyclopedia articles (including the article images and facts) can be freely used under Attribution-ShareAlike license, unless stated otherwise. Cite this article:
Semaphore, South Australia Facts for Kids. Kiddle Encyclopedia.