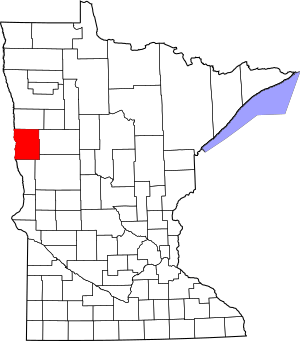 Location of Clay County in Minnesota

There are 18 properties and districts listed on the National Register in the county.

Clay County's National Register properties reflect its significance as a transportation corridor and major agricultural region. The Red River of the North and the Red River Trails were important early routes, but Euro-American settlement was light. The Randolph M. Probstfield House, John Bergquist House, and Bernard Bernhardson House are the preserved homes of some of Clay County's earliest settlers. The construction of two major rail lines in the early 1870s fuelled a great increase in population and agriculture, and cemented the importance of Moorhead as a commercial hub. From the 1870s to the 1920s, large bonanza farms carved from railroad land grants gave way to diversified family outfits like the Wulf C. Krabbenhoft Farmstead. The John Olness House, Solomon Gilman Comstock House, and Burnham Building are associated with individuals who prospered in land speculation and other commercial activities.

All content from Kiddle encyclopedia articles (including the article images and facts) can be freely used under Attribution-ShareAlike license, unless stated otherwise. Cite this article:
National Register of Historic Places listings in Clay County, Minnesota Facts for Kids. Kiddle Encyclopedia.