Near North Side, Omaha facts for kids

The Near North Side of Omaha, Nebraska is the neighborhood immediately north of downtown. It forms the nucleus of the city's African-American community, and its name is often synonymous with the entire North Omaha area. It is bordered by Cuming Street on the south, 30th on the west, 16th on the east, and Locust Street to the north. 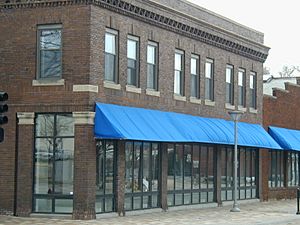 View of the SE corner of 24th & Lake Streets in North Omaha at the heart of the Near North Side.

Bordered by several historic neighborhoods, including Bemis Park, East Omaha, Kountze Park and Saratoga, the Near North Side is perhaps the oldest, and most significant, of each of these. The community was originally platted in 1855 as Scriptown and lots were awarded to Nebraska Territory legislators who voted for Nebraska statehood. Consequently, the area was developed quickly, and included a number of prominent homes.

The area grew throughout the last half of the 1800s as Omaha's suburb, with the first streetcars running up and down its main thoroughfares of 24th and 30th Streets. After the Trans-Mississippi Exposition occurred just north of the area in 1898, Kountze Park was developed to serve the area's widely varied racial and ethnic populations. Omaha's Jewish community was founded by eastern European immigrants in the Near North Side neighborhood. Two Jewish synagogues provided social and cultural activities. Other families were secular and Socialist, as were renowned author Tillie Olsen's parents. Olsen worked in the meatpacking plant as a young woman and became a labor organizer in the 1930s before being able to write full-time. Holy Family Catholic Church served successive congregations of German, Irish, Italian and Czech immigrants in the area. There was such a substantial community of Swedes in the area that a portion of the neighborhood was called "Little Stockholm."

The bustling 24th Street corridor also served these communities, with mixed European immigrant communities mingling with the African American community. Many African Americans moved to Omaha from 1910-1950 as part of the Great Migration. St. John's African Methodist Episcopal Church and Calvin Memorial Presbyterian Church were among the churches founded to serve the black community. 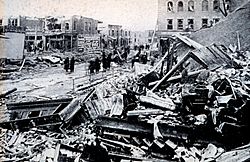 View of the east side of the 24th & Lake Streets in North Omaha after the 1913 tornado. More than 50 people died at this intersection.

The Easter Sunday tornado of 1913 destroyed much of the Near North Side's businesses and neighborhoods. The Idlewild Pool Hall at 2307 North 24th Street in the heart of the neighborhood was the scene of the greatest loss of life. The owner, C. W. Dillard, and 13 customers were killed as they tried to take shelter on the south side of the pool hall’s basement. The victims were crushed by falling debris or overcome by smoke from fires begun when wood stoves used for heating overturned. The postcard image shows the slow process of removing the debris to recover the bodies. The victims were then removed to the Webster Telephone Exchange Building at 2213 Lake Street. More than 50 people died at one intersection during the storm. One report identified this building as a central headquarters in recovering the community, as the many operators went to work despite the building missing all of its windows.

In September 1919, after Red Summer, a mob of white ethnics, chiefly immigrants and immigrant descendants from South Omaha, lynched an African-American worker named Will Brown. The riot followed weeks of increasing tensions inflamed by local newspapers and vice boss Tom Dennsion. Brown's body was burned after his death. After the mob was done with Brown, they attacked police cars and blacks on the street. They were prevented from invading the Near North Side by soldiers called in from Fort Omaha. In addition, the military commander stationed troops in South Omaha to prevent any more mobs from forming.

Throughout its history, students attended a variety of area schools, including Omaha High and Tech High, both just outside the community's boundaries.

Since 1975, the community's historic legacy and the larger story of African Americans in the Great Plains has been interpreted by the Great Plains Black History Museum, started by activist Bertha Calloway. This followed her founding of the Negro History Society in 1962. Her nephew has run the museum since Calloway's sickness has caused her retirement.

Recently the Omaha Storm Chasers proposed building a $54 million stadium as part of a $170 million redevelopment near the Near North Side Omaha's Qwest Center and Creighton University. However, while the stadium plan went through, the Storm Chasers chose to pull out of the project, feeling that the capacity of 24,000 was too large for the team's needs. The new TD Ameritrade Park Omaha, opened in 2011, will now be used primarily for the College World Series, and as the new home for Creighton's baseball program. The Storm Chasers opened their own new stadium in the southern suburb of Papillion in 2011.

Currently the neighborhood has a population of 37,727 and is roughly 65% African-American.

The City of Omaha has recognized many buildings and homes on the Near North Side as landmarks. Several have been recognized as nationally significant as well and listed on the National Register of Historic Places.

All content from Kiddle encyclopedia articles (including the article images and facts) can be freely used under Attribution-ShareAlike license, unless stated otherwise. Cite this article:
Near North Side, Omaha Facts for Kids. Kiddle Encyclopedia.