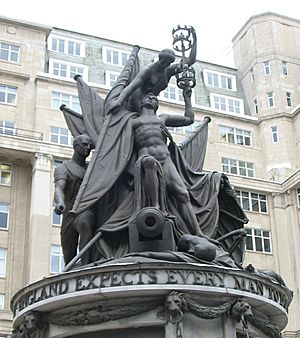 The Nelson Monument is a monument to Admiral Horatio Nelson, in Exchange Flags, Liverpool, England. It was designed by Matthew Cotes Wyatt and sculpted by Richard Westmacott. It stands to the north of the Town Hall and was unveiled in 1813.

In 1805, Liverpool City Council resolved to commemorate Nelson's victory at the Battle of Trafalgar by erecting a monument and voted to pay £1,000 towards its design and construction. A public subscription fund was launched and within two months a total of £8,930 (equivalent to £540,000 in 2018)2018 had been reached; this included £750 from the underwriters at Lloyd's and £500 from the West India Association. It was agreed that the monument should be located in a prominent site near the Exchange. A competition for its design was arranged, and this was won by Matthew Cotes Wyatt, son of James Wyatt, the contract being signed in 1809. Matthew Wyatt was relatively inexperienced, and was assisted by Richard Westmacott. The first stone was laid on 15 July 1812, and the monument was unveiled on 21 October 1813, the eighth anniversary of Nelson's death. In 1866 the monument was moved to its present site in Exchange Flags to allow for an extension to the Exchange Buildings, and the Westmorland stone base was replaced by one in granite. 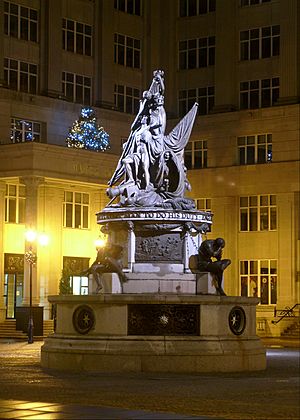 The monument at night

The monument consists of a bronze statue on a stone base. Its overall height is 29 feet (8.8 m), and the circumference of the base is 95 feet 4 inches (29.1 m). The base consists of a drum-shaped pedestal in Westmorland marble 8 feet 10 inches (2.7 m) high, standing on a granite basement 6 feet (1.8 m) high. Seated around the pedestal are four statues depicting manacled prisoners sitting in poses of sadness; they represent Nelson's major victories, the battles of Cape St Vincent, the Nile, Copenhagen, and Trafalgar. Set into the drum between the statues are four bronze bas-reliefs depicting other naval actions in which Nelson was involved. Encircling the pedestal above the statues are swags of laurel hanging from behind lions' heads. Attached to rings in the lions' mouths are chains that descend to manacle the prisoners. At the top of the pedestal is a cornice with an inscription in metal letters reading ENGLAND EXPECTS EVERY MAN TO DO HIS DUTY .

On top of the pedestal is a bronze group of figures 14 feet 2 inches (4.3 m) high, each figure being 7 feet (2.1 m) in height, and forming a roughly pyramidal structure. There are five figures surrounded by the drapes and poles of captured flags, with an anchor and a rope on the ground. An idealised nude representation of Nelson stands with one foot on a cannon and the other on an enemy's corpse, holding upright a sword on which Victory is placing the last of four crowns. To the right of Nelson is the figure of Death reaching out to touch him. On the left of Nelson is a British seaman striding forward. Behind Nelson is the figure of Britannia holding a laurel wreath and Nelson's decorations.

The monument was the first item of public sculpture to be erected in Liverpool, and is recorded in the National Heritage List for England as a designated Grade II* listed building. Grade II* is the middle of the three grades of designation for listed buildings and is applied to "particularly important buildings of more than special interest".

All content from Kiddle encyclopedia articles (including the article images and facts) can be freely used under Attribution-ShareAlike license, unless stated otherwise. Cite this article:
Nelson Monument, Liverpool Facts for Kids. Kiddle Encyclopedia.