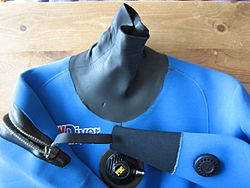 A neck seal, wrist seal, manual vent, inflator, zip and fabric of a neoprene dry suit. Here the soft thin rubber-like seal material at neck and wrists is made from non-foam neoprene for elasticity; the blue area is a thin blue knit fabric laminated onto spongy foamed neoprene for insulation.

Chemical structure of the repeating unit of polychloroprene

Neoprene (also polychloroprene or pc-rubber) is a family of synthetic rubbers that are produced by polymerization of chloroprene. Neoprene exhibits good chemical stability and maintains flexibility over a wide temperature range. Neoprene is sold either as solid rubber or in latex form and is used in a wide variety of applications, such as laptop sleeves, orthopaedic braces (wrist, knee, etc.), electrical insulation, liquid and sheet applied elastomeric membranes or flashings, and automotive fan belts.

Neoprene resists degradation more than natural or synthetic rubber. This relative inertness makes it well suited for demanding applications such as gaskets, hoses, and corrosion-resistant coatings. It can be used as a base for adhesives, noise isolation in power transformer installations, and as padding in external metal cases to protect the contents while allowing a snug fit. It resists burning better than exclusively hydrocarbon based rubbers, resulting in its appearance in weather stripping for fire doors and in combat related attire such as gloves and face masks. Because of its tolerance of extreme conditions, neoprene is used to line landfills. Neoprene's burn point is around 260 °C (500 °F).

In its native state, neoprene is a very pliable rubber-like material with insulating properties similar to rubber or other solid plastics.

Neoprene foam is used in many applications and is produced in either closed-cell or open-cell form. The closed-cell form is waterproof, less compressible and more expensive. The open-cell form can be breathable. It is manufactured by foaming the rubber with nitrogen gas, where the tiny enclosed and separated gas bubbles can also serve as insulation. Nitrogen gas is most commonly used for the foaming of Neoprene foam due to its inertness, flame resistance, and large range of processing temperatures.

Neoprene is used as a load bearing base, usually between two prefabricated reinforced concrete elements or steel plates as well to evenly guide force from one element to another.

Neoprene is a popular material in making protective clothing for aquatic activities. Foamed neoprene is commonly used to make fly fishing waders and wetsuits, as it provides excellent insulation against cold. The foam is quite buoyant, and divers compensate for this by wearing weights. Thick wet suits made at the extreme end of their cold water protection are usually made of 7 mm thick neoprene. Since foam neoprene contains gas pockets, the material compresses under water pressure, getting thinner at greater depths; a 7 mm neoprene wet suit offers much less exposure protection under 100 feet of water than at the surface. A recent advance in neoprene for wet suits is the "super-flex" variety, which mixes spandex into the neoprene for greater flexibility.

Neoprene waders are usually about 5 mm thick, and in the medium price range as compared to cheaper materials such as nylon and more expensive waterproof fabrics made with breathable membranes.

Competitive swimming wetsuits are made of the most expanded foam; they have to be very flexible to allow the swimmer unrestricted movement. The downside is that they are quite fragile.

Recently, neoprene has become a favorite material for lifestyle and other home accessories including laptop sleeves, tablet holders, remote controls, mouse pads, and cycling chamois. In this market, it sometimes competes with LRPu (low-resilience polyurethane), which is a sturdier (more impact-resistant) but less-used material. 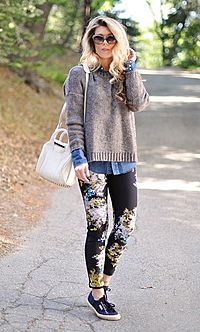 The Rhodes piano used hammer tips made of neoprene in its electric pianos, after changing from felt hammers around 1970.

Hydroponic and aerated gardening systems make use of small neoprene inserts to hold plants in place while propagating cuttings or using net cups. Inserts are relatively small, ranging in size from 1.5 to 5 inches (4 to 13 cm). Neoprene is a good choice for supporting plants because of its flexibility and softness, allowing plants to be held securely in place without the chance of causing damage to the stem. Neoprene root covers also help block out light from entering the rooting chamber of hydroponic systems, allowing for better root growth and to help deter the growth of algae.

In automotive industry, neoprene is often used as a material for car seats or car seat covers. Due to being wear-resistant and its protective characteristics, many car makers offer neoprene seats as an option for additional seat protection. Such seat covers are also included into vehicle packages for active drivers. Neoprene is based on a rubber layer for seat protection against moisture.

Neoprene is used for Halloween masks and masks used for face protection, for insulating CPU sockets, to make waterproof automotive seat covers, in liquid and sheet-applied elastomeric roof membranes or flashings, and in a neoprene-spandex mixture for manufacture of wheelchair positioning harnesses. Because of its chemical resistance and overall durability, neoprene is sometimes used in the manufacture of dishwashing gloves, especially as an alternative to latex. In fashion, neoprene has been used by designers such as Gareth Pugh, Balenciaga, Rick Owens, Lanvin and Vera Wang. This trend, promoted by street style bloggers such as Jim Joquico of Fashion Chameleon, gained traction and trickled down to mainstream fashion around 2014.

All content from Kiddle encyclopedia articles (including the article images and facts) can be freely used under Attribution-ShareAlike license, unless stated otherwise. Cite this article:
Neoprene Facts for Kids. Kiddle Encyclopedia.