New Amsterdam is a town located in Washington Township, Harrison County, Indiana, United States, along the Ohio River. As of the 2010 census, the city population was 27. 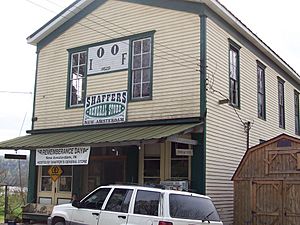 The first European-American settlers in what became New Amsterdam were James Riley and Jacob Youstler. Starting in 1815, they lived in New Amsterdam for several years before relocating further north. The town was formally platted on September 19, 1815, by Jacob Funk and Samuel McAdams.

The town relied on the Ohio River for its growth, as it was the main transportation route for migrating settlers as well as traders up and down river. Steamboats were active on the river during the 19th century and contributed to the growth of waterfront towns. In the 1860 census, New Amsterdam was the largest town in Harrison County.

Floods played a large part in the decline of the town. The Great Ohio River flood of 1937 destroyed 75% of the structures in the town. The only original building remaining in the town is the old country store. A marker on the second story of the building shows the height of the water in the 1937 Flood.

There were 11 households, of which 36.4% had children under the age of 18 living with them, 54.5% were married couples living together, 18.2% had a male householder with no wife present, and 27.3% were non-families. 27.3% of all households were made up of individuals. The average household size was 2.45 and the average family size was 2.75.

The New Amsterdam Festival, also known as Remembrance Day, was held the third Saturday of April and all were welcome. The festival featured a parade, bazaar and competitions. The final year for the festival was 2014.

September 19, 2015 the town put on a small festival to celebrate the bicentennial of the founding of the town. People are trying to see if there will be another festival for 2016. So as of right now another festival is still up in the air.

Old General Store called The Shaffer's General Store. The history of the store, dates back to 1886 where it was opened by the IOOF (Independent Order of Odd Fellow). The 1st floor was primarily used as a mercantile/ trading post, where goods and supplies would be sold to locals and those passing through the area. The General Store has with stood the 1937 and 1997 flood, along with other minor floods that the Ohio River has produced. The ownership of the store changed in 1998 and was reopened in 2000, after remodeling was completed.

A small bait shop located near the Ohio River itself called They're Bitin' Bait Shop. Fishing supplies and other goods are sold there. They also have camping lots with access to electric and satellite TV. A very popular location during Labor Day, Independence Day, Memorial Day, along with summer weekends.

Located near the bait shop is a little ramp, giving access the river directly. This is a good place to fish, undock and redock boats along with taking beautiful sunset photographs. This is also a good place to relax next to the river as the barges and fishing boats go up and down the river.

All content from Kiddle encyclopedia articles (including the article images and facts) can be freely used under Attribution-ShareAlike license, unless stated otherwise. Cite this article:
New Amsterdam, Indiana Facts for Kids. Kiddle Encyclopedia.