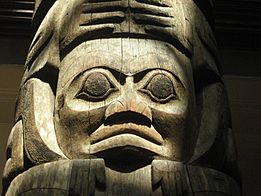 New Clew, also Clue, Kloo, Kliew, Klue, Clew Indian Reserve, is a locality and First Nations reserve of the Haida people, located on the north shore of Louise Island, which is located in Cumshewa Inlet on Haida Gwaii, formerly known as the Queen Charlotte Islands, of the North Coast of British Columbia, Canada.

New Clew is believed to be the site of the historically important Haida village of Tanu or Tlanú, a National Historic Site of Canada which has been cited by anthropologist Wilson Duff as being "of historical importance". "Kloo" is the word in the Skidegate dialect of the Haida language for "canoe".

Across the inlet from New Clew is Cumshewa, which is near the site of another historical village, Djí-gua.

All content from Kiddle encyclopedia articles (including the article images and facts) can be freely used under Attribution-ShareAlike license, unless stated otherwise. Cite this article:
New Clew, British Columbia Facts for Kids. Kiddle Encyclopedia.