The New Harmony Toll Bridge, also known as the Harmony Way Bridge, is a now-closed two-lane bridge across the Wabash River that connects Illinois Route 14 with Indiana State Road 66, which is Church Street in New Harmony, Indiana. The bridge links White County, Illinois with Posey County, Indiana and carried U.S. Route 460 from 1947 until 1974 when the highway was decommissioned in Illinois and Indiana. The four-span bridge is owned by the White County Bridge Commission and was built without federal funds in 1930 by the Big Wabash Bridge Company of Carmi, Illinois. The next bridge across the Wabash about 15 miles (24 km) downstream is the Wabash Memorial Bridge near Mount Vernon, Indiana and the next bridge upstream is for Interstate 64, which does not allow farm vehicles.

The bridge is the first highway bridge erected across the lower Wabash River and the oldest remaining bridge in use over the Wabash's length in Illinois and half of Indiana. The original owner was a private company, the Big Wabash Bridge Company of Carmi, Illinois, which was chartered by Congress to build and operate the bridge on May 1, 1928. The company contracted with the Nashville Bridge Company of Nashville, Tennessee to build it. The bridge opened on December 21, 1930, and 10,000 people attended the dedication of the bridge on December 30, 1930. In 1941, Congress created the White County Bridge Commission as a joint Illinois-Indiana agency to purchase the bridge from the Big Wabash Bridge Company for $895,000.

About 900 vehicles crossed the bridge each day. The bridge collected an average of $30,000 in monthly tolls and had $22,000 in monthly expenses. The bridge was placed on the National Register of Historic Places in 2007 in part because of its relationship to historic New Harmony, Indiana as well as the bridge's age. The three-member Commission was established by Congress on April 12, 1941, but Congress repealed the statute providing for an appointment mechanism in 1998. The Commission's general manager, who is 75, speculated that the bridge would close if the three current commissioners would resign or die.

In 1951, the current toll booth on the western edge of the river was constructed by the Electronic Signal Company, to replace an earlier booth on the eastern edge. In 1952, a tollpayer sued to exercise his right to inspect the books and records of the Commission, but lost his lawsuit and was not allowed access. In 1955, the General Accounting Office issued a report critical of the Commission and claiming that one commissioner had a conflict of interest. In response, the U.S. Department of Justice filed a suit seeking removal of the Commissioner and recovery of the misapplied funds. However, the courts dismissed the case.

From September 2007 to April 2008, the bridge to closed to all traffic when cracks appeared in some of the concrete support piers. During the closure, contractors added new pilings to the existing piers and made other required repairs. In 2010, engineers determined that the bridge required an additional $6 million in repairs. The National Bridge Inventory rated the bridge "Structurally Deficient." 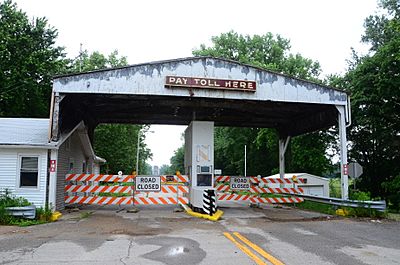 On May 21, 2012, it was announced that the bridge would close permanently at noon on May 29, 2012. White County Bridge Commission member Jim Clark stated, "the cost to make repairs was more than we could imagine." However, Clark then made the decision to close the bridge immediately after receiving the complete report from a team of nine engineers who inspected the bridge. "I knew it was bad, but didn't know just how bad until I received their full report by email Monday morning," Clark said. "Once I saw their weight-load calculations, I knew we had to shut it down right away. We couldn't wait until May 29." The thirteen toll booth employees were laid off. As of the closure there are $49,015 in toll tickets that have not been used. Refunds were given for thirty days from the closure. The closure of the New Harmony Bridge as reported in the Evansville Courier would have a significant impact on farmers in the area and the oil industry. The bridge's closure increases the distance between New Harmony and Crossville, Illinois by about ten miles.

All content from Kiddle encyclopedia articles (including the article images and facts) can be freely used under Attribution-ShareAlike license, unless stated otherwise. Cite this article:
New Harmony Toll Bridge Facts for Kids. Kiddle Encyclopedia.