New Hradec was established in 1887 by Bohemian immigrants from the city of Czechohrad in the Crimea, Ukraine; they had emigrated from Hradec Králové to the Crimea in 1861 prior to coming to the United States. These Bohemians populated much of the area northwest of Dickinson, and are the only documented Bohemians from the Crimea to have settled in America. The community was originally named "Novy Hradec", Czech for "New Castle"; this was later changed to New Hradec. The settlers founded the Saints Peter and Paul Church in 1898; the current church building was constructed in 1917 and is listed on the National Register of Historic Places. The congregation platted the community in the same year. 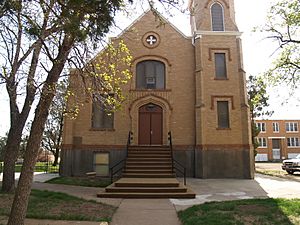 All content from Kiddle encyclopedia articles (including the article images and facts) can be freely used under Attribution-ShareAlike license, unless stated otherwise. Cite this article:
New Hradec, North Dakota Facts for Kids. Kiddle Encyclopedia.