Ngāruawāhia (pop. 5,506) is a town in the Waikato region of the North Island of New Zealand. It is located 20 km north-west of Hamilton at the confluence of the Waikato and Waipa Rivers, adjacent to the Hakarimata Range. Ngāruawāhia lies within the Hamilton Urban Area, the fourth largest urban area in New Zealand. The location was once considered as a potential capital of New Zealand and is regarded as the Māoridom capital. 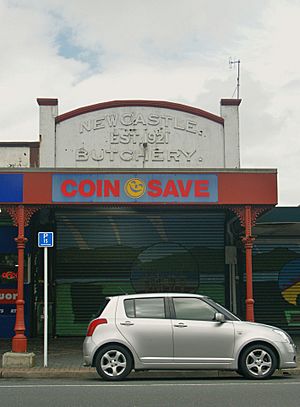 One of the few surviving examples of Ngaruawahia's previous name is the old Newcastle Butchery building, c.1921.

The name Ngāruawāhia means "the opened food pits", which derives from a great feast in the 17th century. Te Ngaere, a Ngāti Tamainupō chief, and Heke-i-te-rangi, a Ngāti Maniapoto woman, had eloped and settled at Ngāruawāhia, causing a rift between their tribes. When their first child was born, Ngāti Maniapoto were invited to the celebration in an attempt to reconcile the tribes. Te Ngaere's father named the boy Te Mana-o-te-rangi in honour of Ngāti Maniapoto. Peace was established between the tribes, and Te Ngaere shouted "Wāhia ngā rua" (break open the food pits).

During the 19th century, Ngaruawahia was named Queenstown and then Newcastle. However, the town returned to the original name in 1878.

Officers from the United States visited Ngaruawahia during World War II and would share food at Hāngis. Queen Elizabeth II has visited Ngaruawahia on two occasions (1953 & 1974). On the latter occasion, then Māori Queen Dame Te Ātairangikaahu and her husband Whatumoana Paki welcomed Queen Elizabeth II to the local marae. The Great Ngaruawahia Music Festival was held in 1973, and featured many music acts, including some that went on to become internationally famous such as Black Sabbath and Split Enz. It was the first large outdoor music festival in New Zealand.

In 1980, Mayor Latta released a book about the history of the town titled 'Meeting of the Waters'.

In March 1998, a freight train derailed on the local North Island Main Trunk line's rail bridge across the Waikato River. The incident caused structural damage to the bridge.

By April 2001, the damaged rail bridge was mended.

In 2008, Ngaruawahia set a world record for the largest haka and by 2010 the town had its own community news. 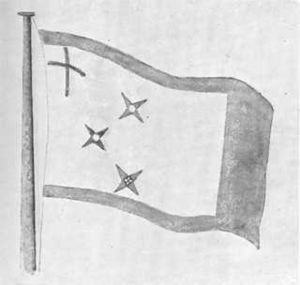 The flag hoisted at Ngāruawāhia on the proclamation of Pōtatau Te Wherowhero as the first Māori King, drawn 1863.

Ngāruawāhia is home to the Kīngitanga. The first Māori King, Pōtatau Te Wherowhero, was crowned at Ngāruawāhia in 1858 and was living there when he died two years later. The current Māori King is Tuheitia Paki who obtained the throne at Turangawaewae Marae immediately following his mother's passing in 2006.

A local gang is Tribal Huk, who have been seen as heroes by the community for providing lunches to schoolchildren in Ngaruawahia, Hamilton and Huntly. In particular, they have been known for making sandwiches which earned them the nickname of Sandwich Gang.

In October 2016, the town became a regular conversation topic nationwide following Tribal Huk president Jamie Pink beginning a movement against P. Waikato District Mayor Allan Sanson supported Pink's message to Ngaruawahia methamphetamine dealers to either leave the town within 24 hours or "visits" would begin. The demand was also supported by members of the community who had gathered at a local meeting as the methamphetamine drug was blamed for an apparent rise of crime in the town. According to a gang source, Ngaruawahia became P free but the Police Association stated that there was no evidence that P dealers had left Ngaruawahia. There is additionally concern Pink has damaged the work that Tribal Huk did feeding a thousand Waikato schoolchildren.

In November 2016, another community meeting was held. Pink was not present at this meeting."

On the northern side of the Waipa River is the Christian Youth Camps (CYC), the largest youth camp site in New Zealand. CYC started in the early 1960s, with large Easter conventions. Today there are two separate camp sites on 38 hectares of land. The camp offers school holiday camps throughout the year. During the terms, the camps are used by various groups, including schools, churches and sporting organisations. 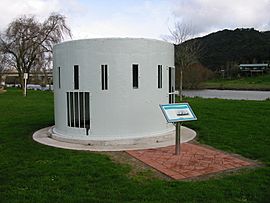 A gun turret of the paddle-steamer gunboat Pioneer, now mounted near the Waikato River.

The town's rugby league teams are Ngaruawahia Panthers and Turangawaewae. The Ngaruawahia Rugby League Club is the oldest such club in the Waikato. Early games were played on varying venues, for instance Taupiri paddock and Paterson Park. The first major match for the town was held in August 1911 when they lost to Auckland 22 - 36 at the Caledonian Ground in Frankton. Ngaruawahia did however beat Hamilton United 27 - 4 in the first ever Northern Union game to be played at Hamilton's Steele Park in 1912. The senior team were Champion of Champions in 1956 and 1957.

Ngaruawahia is the home of the rugby league team Turangawaewae RLC, which is named after the marae opposite the clubrooms. The club currently holds the record for the first team to win consecutive titles in the annual Waicoa Bay Premiers Competition, consisting of all teams in the Waikato, Coast and Bay Of Plenty regions. Ngaruawahia Rugby League Club (Panthers) are 2011 champions, Premiers, U17, U14, U13 are all champions.

The local regatta has been a fundamental event for the region for well over a century. An event is held every year in March on the Waikato River. The first regatta was an unofficial event in 1892, involving both Māori and Pākehā festivities. The regatta provided a means of association between two ethnic groups, socially and culturally. The first official regatta took place in 1896 and since then has grown to become one of New Zealand's largest aquatic festivals. During the centennial regatta in March 1996, over 48,000 people visited the town to see thousands of performers from a number of countries.

For many years, jumping off the rail bridge has been a tradition. However, groups such as KiwiRail want the practice to end.

All content from Kiddle encyclopedia articles (including the article images and facts) can be freely used under Attribution-ShareAlike license, unless stated otherwise. Cite this article:
Ngaruawahia Facts for Kids. Kiddle Encyclopedia.