Nichols Arboretum (123 acres, 49.7 hectares), locally known as the Arb, is an arboretum operated by the University of Michigan. Located on the eastern edge of its Central Campus at 1610 Washington Heights in Ann Arbor, Michigan, the Arboretum is a mosaic of University and City properties operated as one unit. The arboretum is open daily from sunrise to sunset with no charge for admission. The Huron River separates a northern section of the arboretum's floodplain woods; the railroad marks the northern border.

The arboretum was designed in 1906 by O. C. Simonds, and he used the steep glacial topography to include areas both for collections and natural areas. Many of the older plantings date from the 1920s and 1930s. It is particularly known for its Peony Collection, Heathdale Collection (species primarily from Appalachia), the Centennial Shrub Collection and the Dow Prairie. The University of Michigan conducts controlled burns of the prairie each year in an attempt to maintain native species and habitat.

Students flock to the Arb for a variety of outdoor activities beyond assigned studies, such as jogging, picnicking, and sun-bathing. Maps are posted, which include the length and type of trail (gravel, stairs, etc.). The Arb is a common spot for Ann Arbor's students to gather. During winter, students have been known to go sledding in the Arb using cafeteria trays from university dining halls. In recent summers, the Arb has been the site of Shakespeare in the Arb, dramatic performances of Shakespearean plays, including A Midsummer Night's Dream and Love's Labour's Lost; the June 2012 production was The Merry Wives of Windsor. 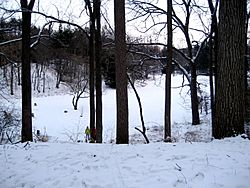 The Nichols Arboretum after a fresh snow, in January 2007.

All content from Kiddle encyclopedia articles (including the article images and facts) can be freely used under Attribution-ShareAlike license, unless stated otherwise. Cite this article:
Nichols Arboretum Facts for Kids. Kiddle Encyclopedia.