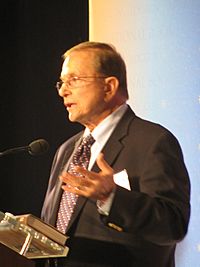 Nathan "Nick" K. Kotz (September 16, 1932 – April 26, 2020) was an American journalist, author, and historian. He was born in San Antonio, Texas. He was best known for his 2005 book Judgment Days: Lyndon Baines Johnson, Martin Luther King Jr., and the Laws that Changed America talking about the roles of President Lyndon B. Johnson and Martin Luther King Jr. in the passage of the 1964, 1965, and 1968 civil rights laws. Kotz won a Pulitzer Prize for National Reporting in 1968.

Kotz was killed outside his farm on April 26, 2020 in Broad Run, Virginia after being hit by his car, aged 87.

All content from Kiddle encyclopedia articles (including the article images and facts) can be freely used under Attribution-ShareAlike license, unless stated otherwise. Cite this article:
Nick Kotz Facts for Kids. Kiddle Encyclopedia.