Nikita Sergeyevich Mikhalkov (Russian: Ники́та Серге́евич Михалко́в; born 21 October 1945) is a Russian filmmaker, actor, and head of the Russian Cinematographers' Union. Three times Laureate of the State Prize of the Russian Federation (1993,1995,1999). Full Cavalier of the Order "For Merit to the Fatherland"

Mikhalkov's first wife was renowned Russian actress Anastasiya Vertinskaya, whom he married on 6 March 1967. They had a son, Stepan, born in September 1966. 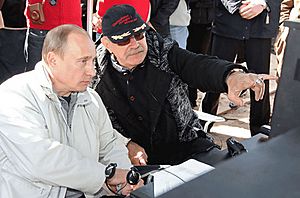 Mikhalkov is actively involved in Russian politics. He is known for his at times Russian nationalist and Slavophile views.

In 2008, he visited Serbia to support Tomislav Nikolić who was running as the ultra-nationalist candidate for the Serb presidency at the time. Mikhalkov took part in a meeting of "Nomocanon", a Serb youth organization which denies war crimes committed by Serbs in the 1992–99 Yugoslav wars. In a speech given to the organization, Mikhalkov spoke about a "war against Orthodoxy" wherein he cited Orthodox Christianity as "the main force which opposes cultural and intellectual McDonald's". In response to his statement, a journalist asked Mikhalkov: "Which is better, McDonald's or Stalinism?" Mikhalkov answered: "That depends on the person". Mikhalkov has described himself as a monarchist.

Mikhalkov has been a strong supporter of Russian president Vladimir Putin. In October 2007, Mikhalkov, who produced a television program for Putin's 55th birthday, co-signed an open letter asking Putin not to step down after the expiry of his term in office.

Mikhalkov's vertical of power-style leadership of the Cinematographers' Union has been criticized by many prominent Russian filmmakers and critics as autocratic, and encouraged many members to leave and form a rival union in April 2010. 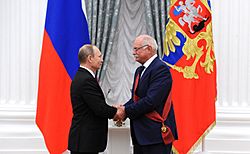 President Vladimir Putin awards the 1st Degree Order of Merit for the Fatherland to Mikhalkov, 10 December 2015.

All content from Kiddle encyclopedia articles (including the article images and facts) can be freely used under Attribution-ShareAlike license, unless stated otherwise. Cite this article:
Nikita Mikhalkov Facts for Kids. Kiddle Encyclopedia.