Nine Mile Point Nuclear Station is a nuclear power plant with two nuclear reactors located in the town of Scriba, approximately five miles northeast of Oswego, New York, on the shore of Lake Ontario. The 900-acre (360 ha) site is also occupied by the James A. FitzPatrick Nuclear Power Plant.

In April 2011, Exelon of Chicago announced its intention to purchase Constellation Energy, the owner and operator of Nine Mile Point Nuclear Station. The acquisition was approved by FERC and the companies officially combined on March 12, 2012 with Constellation Energy taking the Exelon name. Exelon shares ownership of Unit 1 with Électricité de France (49.99%) and Unit 2 with Électricité de France (40.99%), and Long Island Power Authority (18%). Exelon is the sole operator of both Units 1 & 2. Both units are boiling water reactors (BWRs). 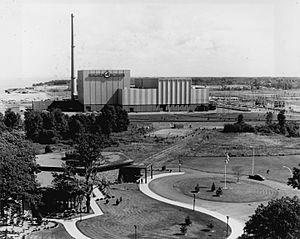 Both units are General Electric boiling water reactors (BWR). Unit 1, a BWR-2 (Generation 2), went online in 1969 and has a rated capacity of 644 megawatts (864,000 hp). It is the oldest operating commercial nuclear reactor still in service in the United States. Unit 2, a BWR-5, has been in operation since 1988 and has a rated capacity of 1,375 MW. Construction of both units, along with neighboring Fitzpatrick, was commissioned by Niagara Mohawk Power Corporation. Fitzpatrick was sold immediately upon completion, while Niagara Mohawk retained its share of the Nine Mile Point units until 2001, when it sold them to Constellation.

On October 31, 2006, Constellation announced that the NRC had granted 20-year license extensions to both units. Unit 1 is now licensed to operate until 2029 and Unit 2 is licensed until 2046.

In early May 2011, the plant operator reported that the plant fuel supplier, General Electric, notified the operator that mathematical errors could've resulted in the reactor's fuel getting hotter than expected.

In 2016, Governor of New York Andrew Cuomo directed the Public Service Commission to consider ratepayer-financed subsidies similar to those for renewable sources to keep nuclear power stations profitable in the competition against natural gas. Indian Point would not be included in the scheme.

Unistar Nuclear, a joint venture between Constellation Energy and Électricité de France (EDF), announced in late 2008 that it had notified the U.S. Nuclear Regulatory Commission (NRC) of its plan to submit a combined construction and operating license (COL) application for a European Pressurized Reactor (EPR) at Constellation Energy's Nine Mile Point site. Less than a year later however, Unistar requested a temporary suspension of the application review, and in 2013, citing a lack of federal loan guarantees, withdrew the application completely.

The Nuclear Regulatory Commission defines two emergency planning zones around nuclear power plants: a plume exposure pathway zone with a radius of 10 miles (16 km), concerned primarily with exposure to, and inhalation of, airborne radioactive contamination, and an ingestion pathway zone of about 50 miles (80 km), concerned primarily with ingestion of food and liquid contaminated by radioactivity.

On August 13, 1991 a "site area emergency" was declared at the plant. According to Time magazine, this was the third occasion an SAE had been declared at a US nuclear plant.

The emergency was due to an electrical fault which caused a momentary loss of electrical power to the reactor and control room. The operators shut down the reactor in accordance with the emergency plan requirements. There were no injuries or release of radiation as a result of the incident. The reactor left emergency procedures about 13 hours after initiation.

The facility was operating at full power when a phase-to-ground electrical fault occurred on phase B of the Unit 2 main power transformer. This resulted in a trip of the main generator, main turbine, and reactor. The fault also caused the voltage on electrical distribution phase B buses to drop to about half of its nominal value for approximately 200 milliseconds, after which it returned to normal.

This momentary voltage drop resulted in the simultaneous loss of power output from each of the five Non-Class 1E uninterruptible power supplies. Exide's UPS units have internal continuously charged back-up batteries to prevent a loss of control logic power. Exide's UPS control logic circuitry receives, processes, generates, and sends electrical signals essential for proper UPS operation. However, in this incident the back-up power battery packs were apparently past their useful life and were completely discharged.

The loss of power from the UPS units caused a loss of all the following: the control room annunciators, the safety parameter display system computer, control rod position indication, the plant process computer, the core thermal limits computer, the feedwater control system, some of the lighting for the plant, the plant radio and paging systems, some instrumentation for balance-of-plant systems, and some instrument recorders.

The loss of control room annunciators concurrent with the plant transient resulting from automatic tripping of the main generator, main turbine, and reactor caused the licensee (Niagara Mohawk) to declare a site area emergency in accordance with the site emergency plan. The loss of control rod position indicators and other equipment losses burdened the operators in implementing the emergency procedures. However, the operators shut down the plant in accordance with emergency procedures. About 13 hours after the plant trip, the reactor was placed in a cold shutdown condition; and approximately 1 hour later, the licensee ended the site area emergency.

The Nuclear Regulatory Commission's estimate of the risk each year of an earthquake intense enough to cause core damage to the reactor at Nine Mile Point was Reactor 1: 1 in 238,095; Reactor 2: 1 in 178,571, according to an NRC study published in August 2010.

All content from Kiddle encyclopedia articles (including the article images and facts) can be freely used under Attribution-ShareAlike license, unless stated otherwise. Cite this article:
Nine Mile Point Nuclear Generating Station Facts for Kids. Kiddle Encyclopedia.