The Ninth Island, part of the Waterhouse Island Group, is a 32-hectare (79-acre) uninhabited granite island situated in Bass Strait, lying close to the north-eastern coast of Tasmania, Australia. In November 2018, it was listed for sale for the fourth time, at $1.98 million. The property for sale is a landlocked title within a conservation covenant, preventing access to the island by any means except helicopter. 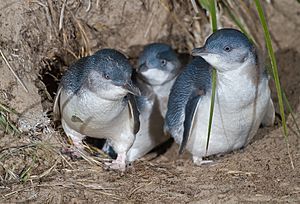 The island is home to thousands of little penguins.

The island is approximately 1.3 kilometres (0.81 mi) long and 550 metres (1,800 ft) wide, lying 11.7 kilometres (7.3 mi) from the north-eastern coast of Tasmania. It is partly privately owned and has been badly affected in the past by grazing, frequent fires and, in July 1995, by the MV Iron Baron oil spill which killed between 2000 and 6000 little penguins. The island forms part of the Ninth and Little Waterhouse Islands Important Bird Area (IBA), so identified by BirdLife International because it holds over 1% of the world population of black-faced cormorants.

The island currently does not have a jetty or an airstrip, so the only way to access the island is via helicopter.

The island is situated within the Dorset Municipality.

All content from Kiddle encyclopedia articles (including the article images and facts) can be freely used under Attribution-ShareAlike license, unless stated otherwise. Cite this article:
Ninth Island Facts for Kids. Kiddle Encyclopedia.