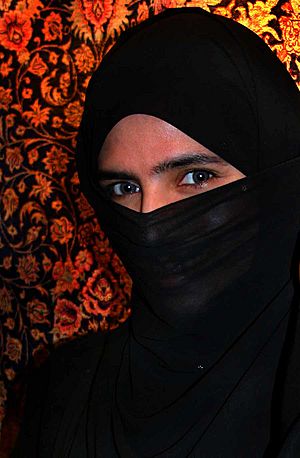 A Yemeni woman with a niqab

A Niqab is a piece of clothing. It is for Muslim women. Women who wear niqab in public are called Niqabi. There are many Niqabis in Kuwait, Saudi Arabia, Bahrain, Qatar,Yemen and Egypt. Niqab covers all the woman's body including the face. Some niqabs have one or two holes for the eyes.

All content from Kiddle encyclopedia articles (including the article images and facts) can be freely used under Attribution-ShareAlike license, unless stated otherwise. Cite this article:
Niqāb Facts for Kids. Kiddle Encyclopedia.