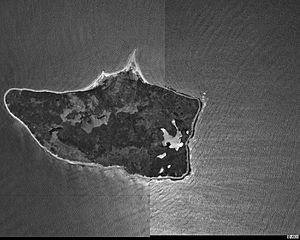 Nomans Land (Wampanoag: Cappoaquit; also mapped "No Man's Land," "No Mans Land," or "No Man's island"), is an uninhabited island 612 acres (248 ha) in size, located in the town of Chilmark, Dukes County, Massachusetts. It is situated about 3 miles (4.8 km) off the southwest corner of the island of Martha's Vineyard.

The island was used by the United States Navy as a practice bombing range from 1943 to 1996. In 1998, the Navy transferred the island to the United States Fish and Wildlife Service for use as an unstaffed wildlife refuge, which now forms Nomans Land Island National Wildlife Refuge. Due to safety risks from unexploded ordnance and its value as a wildlife habitat, the island is closed to all public use. 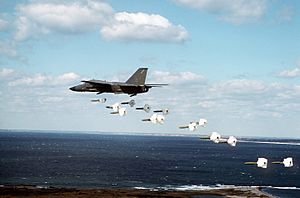 In 1602, during the British ship Concord's exploration of Cape Cod, Captain Bartholomew Gosnold named Nomans Land "Martha's Vineyard" after his eldest daughter, Martha. However, the name was later transferred to the larger island currently known as Martha's Vineyard, which is located northeast of Nomans Land.

The island was probably named "Nomans Land" after a Martha's Vineyard Wampanoag sachem, Tequenoman, who had jurisdiction over the island when the English came in the early 17th century: named from "TequeNoman's Land" (figurative phrase).

An entail of 1695 mentions that William Nicoll of Islip Grange, Long Island, New York, owned the Island of Normans Land near "Martins Vineyard" recalling the fact that on December 19, 1685, Governor Dongan, Lord of the Manor of Martha's Vineyard (including Normans Land) had made Nicoll his Steward there.

An airfield was constructed by the U.S. Navy on the southern edge of the island between November 1942 and May 1944, and the island was used, beginning in World War II, as Nomans Land Range for 53 years (1943–1996). In 1952, the island was sold by the Crane family to the Navy. The airfield was abandoned by the Navy sometime between 1945 and 1954, though usage as a bombing range continued until 1996. 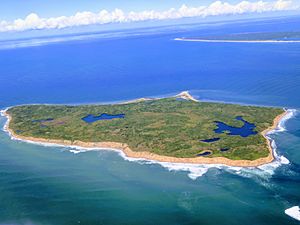 Photograph of the island Nomans Land, Massachusetts during airplane flyover.

A stone covered in runes mentioning the Viking explorer Leif Erikson, believed to be the first European to set foot in North America, was reportedly discovered in 1926 and photographed near the coast the island. While this suggests that Vikings might have travelled as far south as present-day Massachusetts, and that it is the true location of the settlement of Vinland, archaeologists have considered it a hoax. Translations of the runes on the stone contained unusual grammar as well as Roman numerals, which has led to skepticism about its credibility. Undetonated bombs on and around the island have prevented further investigations.

All content from Kiddle encyclopedia articles (including the article images and facts) can be freely used under Attribution-ShareAlike license, unless stated otherwise. Cite this article:
Nomans Land (Massachusetts) Facts for Kids. Kiddle Encyclopedia.