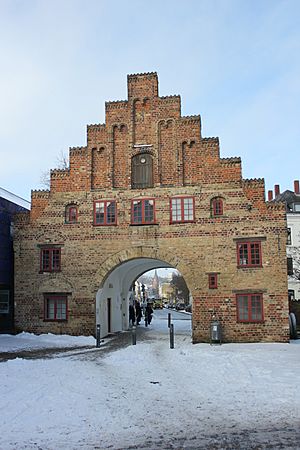 The Nordertor, a town gate, in winter

The Nordertor (Danish: Nørreport) is an old town gate of the city of Flensburg. The gate was built around 1595. Today, the little Landmark is in use as a symbol for the German town Flensburg.

In 1345 the town of Flensburg began to build its town wall. A gate was built on the north side of the town. It was called Norder Porte. It was replaced by a building in the 16th century called the Nordertor. This marked the northern boundary of the town. It was a checkpoint that was closed in the night.

On the north side of the gate are two plaques. The left one shows the royal coat of arms of King Christian IV, 1577-1648 and the Latin words: „Regna Firmat Pietas“ — Piety strengthens the Realms. The right one shows the coat of arms of Flensburg with the German words: „Friede ernährt, Unfrieden verzehrt“ — Peace nurtures, strife devours. There is also a date- 1767. This means that the town gate was restored in the time of Christian VII, 1749-1808.

After 1796 the town grew beyond the town wall. There had been a ban on building outside the wall before then. The Neustadt (Newtown), in the neighborhood of the Nordertor was built. In 1913 and 1914 it was restored by the architect Paul Ziegler. The Nordertor got a clock. In 1966 the Deutsche Bundespost made a stamp with a picture of the gate on it. It was a 30 Pfennig stamp, used to send letters within Germany. The Nordertor stamps were sold over 3 billion times. In the 1990s the gate was again restored and the clock was removed. In 2004 the gate was licensed as a venue for civil weddings, so that the weddings could be performed since then directly above the archway of the gate.

All content from Kiddle encyclopedia articles (including the article images and facts) can be freely used under Attribution-ShareAlike license, unless stated otherwise. Cite this article:
Nordertor Facts for Kids. Kiddle Encyclopedia.