North East Mall (previously as Northeast Mall) is an American super-regional shopping mall located in Hurst, Texas, United States, a suburb in the Dallas/Fort Worth metroplex. It is located below highways SH 121, SH 183, and is east of Interstate Highway 820 S. It features two units, the main mall and the outside being the Shops at North East Mall both encompassing a total of 2,134,000 square feet (198,000 m²) and featuring 135 stores. 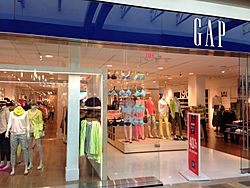 Gap at North East Mall in the Dillard's wing.

In 1995, they expanded the mall during the holiday season, later it uploaded to YT. 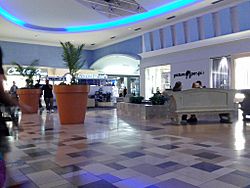 At the same time in 1999, the first parking structure were both completed. Four parking garages were also constructed as part of the 1998–2001 remodeling. A new South Wing was built, containing 28 store spaces.

In the fall of 2000, Saks Fifth Avenue opened as the first and only store in Tarrant County inside a 100,000 sq ft space at the mall.

When North East Mall held its official re-dedication on September 15, 2001, the center encompassed 1,749,000 leasable square feet and 168 stores and services. It was then the second-largest enclosed shopping mall in the Dallas–Fort Worth metroplex and the second-largest in Texas, following The Galleria in Houston.

In 2006, it was announced that Saks Fifth Avenue will would be closing their Hurst location at North East Mall on September 16, 2006.

On January 23, 2014, Dallas Morning News reported that new additions were coming to North East Mall, which were expected to open in spring 2014. On January 27, 2014, KTVT reported that the construction on State Highway 183 was decreasing the population of the mall, as well the sales.

On June 30, 2014, it was reported by the Fort Worth Business Press that according to Simon, new additions were coming to the mall.

On August 6, 2019, it was announced that Sears would be closing this location as part of a plan to close 26 stores nationwide. The store closed in October 2019.

On November 1, 2019, a major scale refurbishment of the JCPenney store would be completed. The store would have its lighting fixtures, departments and internal embellishments replaced.

All content from Kiddle encyclopedia articles (including the article images and facts) can be freely used under Attribution-ShareAlike license, unless stated otherwise. Cite this article:
North East Mall Facts for Kids. Kiddle Encyclopedia.