North Eton is a locality in the Mackay Region, Queensland, Australia. In the 2011 census, North Eton had a population of 536 people.

The neighbourhood of Victoria is located within North Eton.

The land is very flat, 30 metres above sea level, with a small rise on the western edge of the locality at the foothills of Mount at the base of Mount Kinchant (in the neighbouring locality of Kinchant Dam). The north branch of Sandy Creek flows from the north-west to the south-east of the locality and is part of the Plane Creek drainage basin. The land is entirely used for farming, predominantly sugar cane. 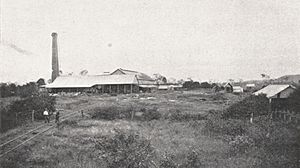 Originally known as the Defiance, the North Eton Central Mill commenced crushing sugarcane in 1888. It was the first sugar mill sponsored by the Queensland Government. In 1989, a number of sugar mills in the district merged to Mackay Sugar Limited, resulting in the closure of the North Eton mill.

The North Eton State School opened on 5 August 1895, but has also been known as the Eton North State School.

All content from Kiddle encyclopedia articles (including the article images and facts) can be freely used under Attribution-ShareAlike license, unless stated otherwise. Cite this article:
North Eton, Queensland Facts for Kids. Kiddle Encyclopedia.