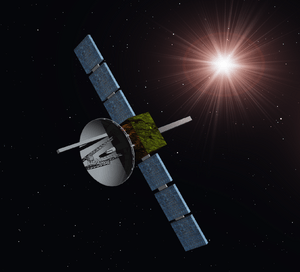 Nozomi (のぞみ) is the name of the a Japanese spacecraft which was sent toward Mars.

The launch was a project of the Institute of Space and Astronautical Science of the University of Tokyo.

Nozumi was planned as a Mars-orbiting probe. The mission was not successful because of electrical failures.

Nozomi carried scientific instruments from Japan, Canada, Germany, Sweden and the United States. including the European Space Agency, NASA and the Swedish Institute of Space Physics.

Canada provided a thermal plasma analyser. This was the Canadian Space Agency's first participation in an interplanetary mission.

All content from Kiddle encyclopedia articles (including the article images and facts) can be freely used under Attribution-ShareAlike license, unless stated otherwise. Cite this article:
Nozomi (spacecraft) Facts for Kids. Kiddle Encyclopedia.