Institute of Space and Astronautical Science facts for kids 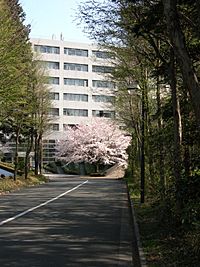 Entrance to the ISAS Sagamihara campus

The ISAS began at the University of Tokyo in the 1955.

In 1994, Japan launched its first large rocket built solely with its own technology. According to Shigebumi Saito, former head of Japan's Space Activities Commission, "If we have no vehicle, it is like a navy without ships,"

ISAS was merged with two other space agencies in 2003 when JAXA was established.

Before establishment of JAXA

After establishment of JAXA

All content from Kiddle encyclopedia articles (including the article images and facts) can be freely used under Attribution-ShareAlike license, unless stated otherwise. Cite this article:
Institute of Space and Astronautical Science Facts for Kids. Kiddle Encyclopedia.