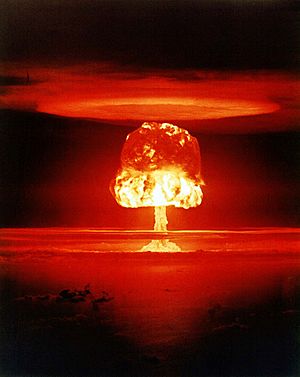 Nuclear engineering is a field of engineering dealing with application of atomic nuclei breakdown and other sub-atomic physics, based on the principles of nuclear physics. It includes the interaction and maintenance of nuclear fission systems and components such as nuclear reactors, nuclear power plants, and nuclear weapons.

Nuclear engineering also includes the study of nuclear fusion, medical and other applications of radiation, radiation safety, heat transport, nuclear fuel and other related technologies, nuclear proliferation, and the effect of radioactive waste or radioactivity on the environment.

The United States currently generates about 18% of its electricity from nuclear power plants. Nuclear engineers in this field generally work, directly or indirectly, in the nuclear power industry or for national laboratories. Employment in nuclear engineering is predicted to grow about nine percent to year 2022 as needed to replace retiring nuclear engineers, provide maintenance and updating of safety systems in power plants, and to advance the applications of nuclear medicine.

Medical physics is an important field of nuclear medicine; its sub-fields include nuclear medicine, radiation therapy, health physics, and diagnostic imaging. Highly specialized and intricately operating equipment, including x-ray machines, MRI and PET scanners and many other devices provide most of modern medicine's diagnostic capability—along with disclosing subtle treatment options.

Radiation measurement is fundamental to the science and practice of radiation protection, sometimes known as radiological protection, which is the protection of people and the environment from the harmful effects of uncontrolled radiation.

Nuclear engineers and radiological scientists are interested in developing more advanced ionizing radiation measurement and detection systems, and using these advances to improve imaging technologies; these areas include detector design, fabrication and analysis, measurements of fundamental atomic and nuclear parameters, and radiation imaging systems, among others.

All content from Kiddle encyclopedia articles (including the article images and facts) can be freely used under Attribution-ShareAlike license, unless stated otherwise. Cite this article:
Nuclear engineering Facts for Kids. Kiddle Encyclopedia.