Oakwood Center is a major shopping mall in Terrytown, Louisiana, on the West Bank of the Mississippi River in the New Orleans metropolitan area. It was originally named "Oakwood Mall", and some signage and local usage continue to call it that. It is geographically in Terrytown, but the mailing address is in adjacent Gretna, Louisiana. Anchor stores include Dick's Sporting Goods, Dillard's, and JCPenney.

"Oakwood Mall" opened in 1966, taking advantage of the increased development on the West Bank following the opening of the Crescent City Connection. One of the former anchor stores was D. H. Holmes. It was replaced by a Dillard's store in 1992, and then by Marshalls.

Oakwood Center fell victim to significant damage in the aftermath of Hurricane Katrina. The mall was heavily looted and set on fire on August 31, 2005. Nearly 80% of the stores experienced fire or water damage. The main shopping area was closed during demolition and construction. Two department stores, Sears and Dillard's, along with Dollar Tree, Foot Locker, and the Bank of Louisiana reopened before the entire mall reopened. Oakwood Center completely reopened on October 19, 2007, except for the Mervyns wing.

In 2013, it was confirmed that the Mervyns wing would be torn down for Dick's Sporting Goods.

On August 22, 2018, it was announced that Sears would be closing as part of a plan to close 46 stores nationwide. The store closed in November 2018. 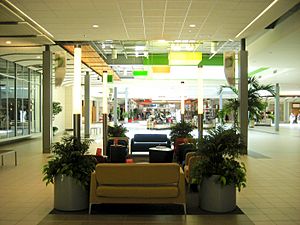 All content from Kiddle encyclopedia articles (including the article images and facts) can be freely used under Attribution-ShareAlike license, unless stated otherwise. Cite this article:
Oakwood Center Facts for Kids. Kiddle Encyclopedia.