Obetz is a village in Franklin County, Ohio, United States. The population was 4,532 at the 2010 census. The community (originally "Obetz Junction", in honor of settler Charles Obetz) was formed in 1838 as a stagecoach junction, and incorporated in 1928. Nearby "Reese Station" served as the railroad station for the immediate area, while other adjacent communities such as Groveport, Lockbourne and Canal Winchester were part of the Ohio and Erie Canal canal and lock system. The close proximity of Obetz Junction to these terminal towns transformed the area into a hub of commerce, travel and trade in mid-19th century. Communities such as Obetz and its neighbors, with their strong ties to transportation helped to further cement Central and Columbus, Ohio's status as the state capital.

There were 1,667 households of which 40.2% had children under the age of 18 living with them, 49.6% were married couples living together, 16.8% had a female householder with no husband present, 6.5% had a male householder with no wife present, and 27.2% were non-families. 22.2% of all households were made up of individuals and 6.8% had someone living alone who was 65 years of age or older. The average household size was 2.72 and the average family size was 3.17.

There were 1,488 households out of which 37.8% had children under the age of 18 living with them, 55.4% were married couples living together, 14.0% had a female householder with no husband present, and 25.8% were non-families. 20.2% of all households were made up of individuals and 6.7% had someone living alone who was 65 years of age or older. The average household size was 2.67 and the average family size was 3.07.

There are seven public parks within the Village of Obetz: Dixon Quarry, Memorial Park, Bridlewood Park, McFadyen Park, Lancaster Park, Veterans Park, and Community Center Park. These parks amount to 136 acres. From fishing to archery or basketball to bocce ball, these parks have a lot to offer. Obetz works to enhance the quality of life for its residents through outgoing efforts toward the preservation/development of indoor and outdoor facilities. 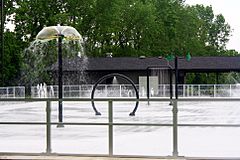 Memorial Park stretches between the Obetz Government Center and the Street Department building, which is at the western end of Orchard Lane. The Obetz Athletic Club is located in Memorial Park, and it's also the location of the Village’s annual Zucchinifest. Memorial Park is also where the Ohio Aviators plays their home games. With a total area of 80 acres, Memorial Park is the largest of all the existing parks. The park has a one-acre fishing pond stocked with largemouth bass, bluegill, and channel catfish. A gravel parking area is near the pond for your convenience. The park contains two basketball courts, three football/soccer fields, a softball/baseball complex, two concession stands, a children’s play area with playground equipment and benches, as well as a large paved parking lot. Paved walking paths are located throughout the park. Dirt nature trails are located in the wooded area around the Columbus Crew Training Facility.

Bridlewood Park is a six-acre park located along Bridlewood Blvd. The park contains a playground with a swing set, slide, spring toys, and climbing toys. The park also has a sand volleyball court and a shelter house with picnic tables and grills.

McFadyen Park is a three-acre park located along Jermoore Road. The park has swing sets and a climbing toy with slides. It also has a basketball court and a paved parking area.

Veterans Park is a small half-acre park located along Groveport Road next to Lancaster Park. It contains a gazebo and benches. It also has several memorials to Obetz veterans. 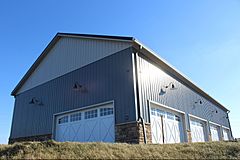 The Community Center Park is a three-acre park located at 1650 Obetz Avenue, next to the Community Center. The park contains a tennis court, two basketball courts, playground equipment, spring toys, and swing set. The park also has a shelter house with picnic tables and grills. There is a small paved walking path and benches in the park as well as paved parking area. 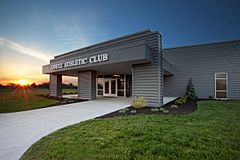 The 16,000 square foot Obetz Athletic Club is located in Memorial Park next to the football and baseball fields. In addition to the circuit training, strength training, flexibility training, and cardiovascular training equipment, the OAC offers two golf simulators. Personal fitness training is also available at this facility.

Obetz is home to the Zucchinifest. The festival is a four-day, family festival held in Memorial Park. The annual festival occurs the Thursday, Friday, Saturday, and Sunday before Labor Day weekend. There are rides, food, games, and entertainment. The entertainment includes things like concerts, a beer garden, a pageant, a parade, and a car and motorcycle show. Admission to the festival and concerts are free.

All content from Kiddle encyclopedia articles (including the article images and facts) can be freely used under Attribution-ShareAlike license, unless stated otherwise. Cite this article:
Obetz, Ohio Facts for Kids. Kiddle Encyclopedia.