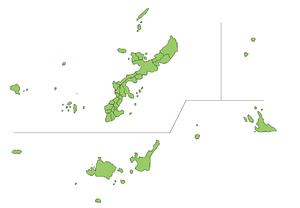 Okinawa is the name for the biggest island in the Ryūkyū Islands, far south of Japan. It is also the common name for Okinawa Prefecture, which controls the Southern Ryūkyū Islands.

The capital of Okinawa is Naha. Naha is on the island with the most people, Okinawa island. Okinawa used to be called Great Lew Chew Island.

Many of Okinawa's islands are scenic, and there are many beaches there.

The temperature in Okinawa is often warm or hot. Many animals make their home around the Okinawa islands. For example, sea turtles, jellyfish, and many kinds of birds all live around Okinawa.

An average person in Okinawa lives to be older than 90. Some people think that is because Okinawan food is healthy. Fish is very popular, but people also eat sea vegetables and pork. Okinawan food is famous for its originality. Examples of local specialties are Okinawa Soba, Go-ya Champuru, Rafute, and Ji-mami-doufu.

Okinawa's music is popular all over Japan. A musical instrument called a sanshin is often used.

Okinawa was the site of the last big battle of World War II, the Battle of Okinawa. A lot of Okinawan people died during the battle. Now, the United States has some military bases for soldiers on the different islands of Okinawa. There are some symbols of this battle in Okinawa. The Himeyuri Monument is the most famous symbol. 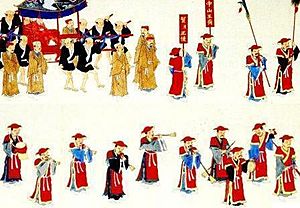 A Ryukyuan embassy in Edo.

Okinawa is currently a part of Japan. However, it has its own history and culture distinguished from Japan. The history of Okinawa is usually divided into five eras as follows.

In the prehistoric era, hunting animals and collecting plants prevailed. A shift to farming advanced during the 10th to 12th centuries. Many communities were formed, and integrated into the three small countries of Hokuzan, Chūzan, and Nanzan. In 1372, Chūzan began paying tribute to the Chinese Ming Dynasty. This small country became strong by trade with the Ming dynasty, and attacked the other countries. It became the "Ryūkyū Kingdom". This kingdom flourished through trade throughout Asia during the 15th and 16th centuries.

In 1609, Shimazu Iehisa invaded the Ryūkyū Kingdom. He was the feudal lord of Satsuma Province. This invasion meant that the Ryūkyū Kingdom was forced to pay tribute to the Japanese shogunate regime. This domination continued until the end of the 19th century.

At first, Japan emphasized the differences between Okinawan and Japanese culture, to justify discriminatory policies in the colony. However, to justify the colonization to the West, the policies were changed to ones which emphasized similarities and which assimilated Okinawa into Japan. Thus, Okinawan society has been greatly influenced by Japan. The Japanese taught Okinawan children that the Okinawan language was a "dialect" of Japanese, and students were punished for speaking their native language. Okinawa was caught up in the Japanese war against U.S.A. and China. Okinawa was incorporated into the war system. At the end of World War II, Okinawa itself became the battlefield, the social infrastructure was completely destroyed, and many people died.

All content from Kiddle encyclopedia articles (including the article images and facts) can be freely used under Attribution-ShareAlike license, unless stated otherwise. Cite this article:
Okinawa Facts for Kids. Kiddle Encyclopedia.