Old Hilltown (formerly, Hill Town) is an unincorporated community in Monterey County, California. It is located on the north side of the Salinas River 3 miles (4.8 km) south-southwest of Salinas on California State Route 68, at an elevation of 46 feet (14 m). The name is from James Bryant Hill, one of the first settler in the area. The first European land exploration of Alta California, the Spanish Portolá expedition, camped on the Salinas River in this vicinity on September 30, 1769, having followed the river from the south for several days. From this camp, the scouts went out to survey the route ahead and saw Monterey Bay for the first time. Unsure whether the point they could see at the southern end of the bay was the "Point of Pines" described by Sebastian Vizcaino in 1602, Portola decided that the party should investigate. 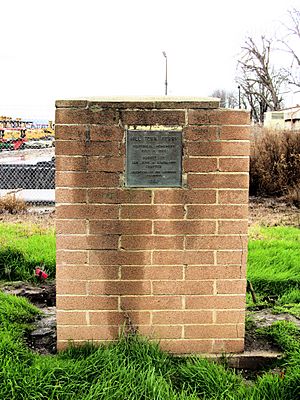 All content from Kiddle encyclopedia articles (including the article images and facts) can be freely used under Attribution-ShareAlike license, unless stated otherwise. Cite this article:
Old Hilltown, California Facts for Kids. Kiddle Encyclopedia.