Oldtown (Irish: An tSeanbhaile) is a population centre and townland in the civil parish of Clonmethan in Fingal, Ireland. The R122 road runs through the village linking Naul to St Margaret's and Dublin Airport.

The character of the landscape is Low-Lying Agricultural, as indicated in the County Development Plan. This area contains mixed pasture and arable farming on low lands, consisting of large fields with few tree belts or large settlements with few panoramic views or prospects.

The village itself is situated in a shallow valley drained by a small river known locally as ‘The Daws River’ and is surrounded by lands zoned as agricultural in the 1999 Fingal County Development Plan. It is the policy of the Council to protect and provide for the development of agriculture and rural amenity within this zone.

Oldtown is a good example of a "chapel village" which led to a widespread investment in chapel building following the re-emergence of institutional Catholicism in the late eighteenth century.

The original chapel, which was built in 1827, became the focal point of the village and attracted a range of other services such as the national school, community hall, priest’s house, shop, public house and forge. The term ‘chapel villages’ has been coined for settlements which evolved in association with the growing social and cultural importance of the Catholic Church in Irish society. 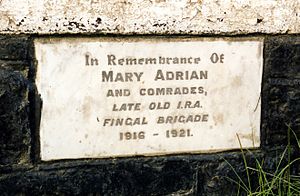 Commemoration plaque on the
bridge in Oldtown

Molly Weston a heroine of the 1798 rebellion was born near Oldtown. She fought alongside her three brothers at Tara. A memorial was erected to her memory at Oldtown during the 1798 Bi-Centennial in 1998. "Arrayed in green... mounted on a white horse, [she] rode hither and thither upon the field with drawn sword in hand, rallying the pikemen and leading them in successive charges with the utmost fearlessness." (Patrick Archer, Fingal in 1798). She wore a green riding costume, with gold braid in the manner of a uniform and a green cocked hat with a white plume. She was armed with sword and pistols and was accompanied by her four brothers when she rode into battle. Weston rallied and regrouped the stricken pikemen; she placed herself at their head and led repeated charges against the Reagh Fencibles."She fired a big gun captured from the Fencibles during the course of the battle, killing eleven of their number. Molly died along with her four brothers at the Battle of Tara. Her side-saddle was recovered from the battlefield.

Oldtown was the first town in the State to benefit from the Rural Electrification Scheme, run by the Electricity Supply Board from 1946 to 1979. The first electricity pole was ceremoniously erected in November, 1946 at Kilsallaghan, and the first switch-on, was in Oldtown itself, in January 1947. The 50th anniversary of the event was commemorated in the village, by the ESB hosting a dinner, to which families living in the area since 1946, were invited.

More recently in the winter of 1981/1982 a large snowstorm cut off the village for 5 days, eventually the Air Corps had to fly in supplies such as food and medicine via helicopter to relieve the village.

The village core consists of a mix of two-storey nineteenth century stone built dwellings, single-storey cottages and bungalows. The new stone-built terraced dwellings within the core complement the scale and the vernacular architecture of the village.

The recently redeveloped thatched cottage and Oldtown Local Hall, a corrugated community hall recently restored, add to the unique identity of the village – however the small development of detached dormer bungalows located to the north of the village, contribute little to the streetscape and village character. The northern, western and southern approaches to the village are characterised mainly by low density ‘one-off’ dormers and bungalows with the exception of Shamrock Park, a small Council housing development to the south of the village.

The Catholic Church, Our Lady Queen of Peace, and presbytery are located south of the village core.

There is a significant level of undeveloped land within and close to the village core, which will serve to facilitate the augmentation and consolidation of the village.

Currently there are limited commercial facilities in the village. These include a public house – The Oldtown House – and general grocer – Dave's Village Store – and a veterinary surgery.

Community facilities include the local primary school, the Catholic Church, the Oldtown Local Hall and a horse riding stable. The County Council’s mobile library service visits the village on a weekly basis. The Oldtown Health and Care Centre is a large Health Service Executive facility located to the south of the village which provides full-time care for disabled people and a community Health Centre where a wide variety of health and related services are provided. A Citizens Information Centre is also available here a few days each month.

Oldtown has a large playing field, close to the centre of the village, which is home to the Wild Geese. First founded in 1888, it is said to be the oldest Gaelic Athletic Association club in Dublin. The club recently won the Junior 'E' Dublin football championship, beating Park Rangers in the final. The field is also the location of an indoor handball alley, which is still in regular use. Oldtown has a proud tradition in the sport and a number of former world champions are from the village. The alley is primarily used nowadays for racquetball.

All content from Kiddle encyclopedia articles (including the article images and facts) can be freely used under Attribution-ShareAlike license, unless stated otherwise. Cite this article:
Oldtown, Dublin Facts for Kids. Kiddle Encyclopedia.