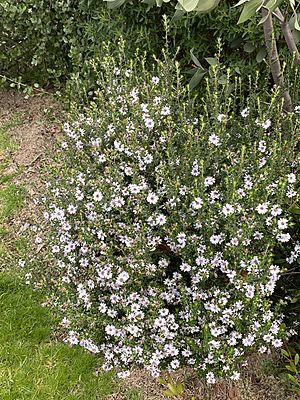 Olearia minor, is a small flowering shrub in the family Asteraceae. It has alternate leaves and white to pale mauve daisy-like flowers from winter to December. It grows in Western Australia, South Australia, New South Wales, and Victoria.

This daisy was first formally described in 1867 by George Bentham who gave it the name Olearia pimeleoides var. minor in Flora Australiensis. In 1991, Nicholas Lander raised the variety to species status as Olearia minor and the change was published in the journal Telopea.

This species grows in mallee or open scrubland on loam or yellow brown sand or rocky slopes mostly around Balranald district, Dubbo and the Budawang Range in New South Wales. In Victoria a scattered distribution on loamy soils with mallee in the north-west near Bambill to near the Little Desert and dry forest in the northern Brisbane Ranges and Werribbee Gorge. In Western Australia it grows in sandstone, limestone, sand dunes or rocky slopes amongst mallee or scrubland near Coolgardie, Esperance and the wheatbelt.

All content from Kiddle encyclopedia articles (including the article images and facts) can be freely used under Attribution-ShareAlike license, unless stated otherwise. Cite this article:
Olearia minor Facts for Kids. Kiddle Encyclopedia.