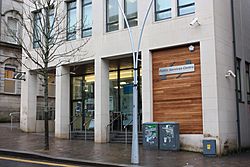 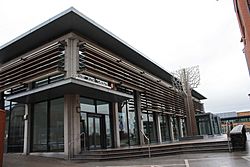 Its headquarters was in the town of Omagh, which is the traditional county town of Tyrone. The council area was about 440 square miles (1,100 km2), making it the second largest local council area in Northern Ireland (by area) with a population of just over 50,000 (25,000 of whom lived in Omagh town). Apart from Omagh the area of the former District Council contains smaller towns including Drumquin, Dromore, Trillick, Fintona, Beragh, Carrickmore and Sixmilecross.

The council was established in 1973 and originally had 20 councillors but following a review of local government boundaries in the early 1980s, the number of councillors was increased to 21. Omagh District Council consisted of three electoral areas: Omagh Town, Mid Tyrone and West Tyrone. In the last elections in 2011 members were elected from the following political parties: 10 Sinn Féin, 3 Social Democratic and Labour Party (SDLP), 3 Ulster Unionist Party (UUP), 3 Democratic Unionist Party (DUP) and 2 Independents. The election of Chairman and Vice Chairman of the Council took place annually in June.

In both the Westminster Parliament and the Northern Ireland Assembly, Omagh is completely contained within the West Tyrone constituency.

Under the Review of Public Administration (RPA), the council is due to merge with Fermanagh District Council in 2011 to form a single council for the enlarged area totalling 2829 km² and a population of 105,479. The next election was due to take place in May 2009, but on 25 April 2008, Shaun Woodward, Secretary of State for Northern Ireland announced that the scheduled 2009 district council elections were to be postponed until the introduction of the eleven new councils in 2011.

The council area (especially Omagh town) has seen significant growth in the past few years, with the population rising by the most in years. Many housing estates and shopping areas have sprung up in recent times as well.

The area covered by Omagh District Council has a population of 51,536 residents according to the 2011 Northern Ireland census.

The council owns and runs the Strule Arts Centre in Omagh town centre.

All content from Kiddle encyclopedia articles (including the article images and facts) can be freely used under Attribution-ShareAlike license, unless stated otherwise. Cite this article:
Omagh District Council Facts for Kids. Kiddle Encyclopedia.