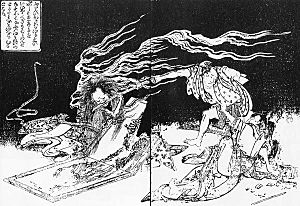 Onryō (怨霊) is a Japanese ghost (Yūrei, 幽霊) who is believed to be able to return to the world of the living to seek revenge. Some onryō are male, mostly in Kabuki, but most of them are women. They usually suffer at the hands of their male lovers when they were alive, because they were weak, but they become strong in death.

In Japanese tradition, the spiritual world has Yomi (hell) on one side and the world of the living in the other. In the middle, there is a waiting area, like a purgatory, where spirits lie in doubt before moving on. Some spirits, especially those of murdered people, can go back to the world of the living, influenced by feelings of anger, sadness, or love.

Onryō and yūrei do not have a particular look. But the popularity of Kabuki in the Edo Period meant that a costume was created to show what they look like. This usually included a white burial kimono, long and black, messy hair, and white and purple make-up. The influence of this image can be seen in modern movies about Onryō, like Ring.

All content from Kiddle encyclopedia articles (including the article images and facts) can be freely used under Attribution-ShareAlike license, unless stated otherwise. Cite this article:
Onryō Facts for Kids. Kiddle Encyclopedia.