Ordino (Catalan pronunciation: [uɾˈðinu]) is the most northerly parish in the Principality of Andorra. It's mostly the main area of Valira del Nord or Valira d'Ordino river valley. Ordino is also the name of the main town of the parish. Other settlements in the parish are El Serrat, Ansalonga, Sornàs, La Cortinada, Llorts, Segudet, Arans, Les Salines and Arcalís. It is home to the Sorteny National Park, the largest nature area of Andorra. It has a population of 4,858, as of 2017. The town preserves a vast medieval center, mainly linked to the culture of the country.

The parish has borders with France (Occitanie) and also with the parishes of La Massana, Canillo, and Encamp. The only main road and only all year external link is the CG-3 leading to the neighbouring parish of La Massana. With 85 km² is the third largest parish after Canillo and Encamp.

The town of Ordino lies on the footslopes of Casamanya (2740 m), a mountain which has spectacular panoramic views from its summit being located almost exactly in the centre of Andorra. 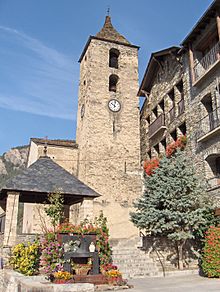 The etymological origin of the name of the parish Ordino and its capital is pre-Roman, and it is documented for the first time in the Acta de Consagració i Dotació de la Catedral de la Seu d'Urgell (Deed of Consecration and Endowment of the Cathedral of La Seu d'Urgell), during the 9th century, as Hordinavi or Sant Cebrià d'Hordinavi.

Ordino is historically known for its ironworks of the 16th century, especially Farga del Serrat and Farga de l'Areny. Besides being the industrial center of Andorra, Ordino is considered the cultural center of Andorra. Here Antoni Fiter i Rossell wrote the Manual Digest (1748), called the "Bible of Andorra," which tells the story, the government and the Andorran customs.

The town of Ordino include the parish church of Sant Corneli i Sant Cebrià, already mentioned in 839, was mainly built during the 12th and 13th centuries. The Romanesque church of Sant Martí de la Cortinada, with 12th-century murals, is also a good example of romanesque Andorran art.

Manor houses like Fiter-Riba or Casa Rossell, which holds the original Manual Digest and Areny-Plandolit family house, owners of Farga de l'Areny, represented the good society of Andorra between the 17th and 19th centuries. Both mansions were acquired in 1972 by Consell General and converted into an ethnological and historical museum.

The parish and town is the namesake of the Andorran legend El buner d'Ordino, in which a bagpiper from Ordino, en route to a festival in Canillo, is chased and treed by wolves, but frightens them off by playing his instrument.

The National Auditorium of Andorra (Catalan: Auditori Nacional d'Andorra) is located in Ordino town. The International Narciso Yepes Festival, a series of classical music concerts, has been held there every October since 1983. The festival was started by the late guitarist, Narciso Yepes.

The Postal and Postcard Museum of Andorra (Catalan: Museu Postal d'Andorra) and the Miniature Museum (Catalan: Museu de la Miniatura) are localed in the parish of Ordino.

La Ruta del Ferro, which translates into English as the Iron Route, is a cultural route of old iron ore mines and rural cottages across the Valira del Nord, between Llorts and La Cortinada. It is part of the old road that the carriers used to carry the iron from the mines of Llorts to the ironwork forges of La Massana. 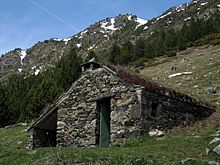 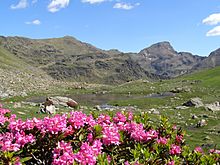 View from Tristaina lakes of La Coma d'Ordino and Arcalís.

A festival deeply rooted in the town of Ordino is El Roser d'Ordino or The Rose Festival, in which the processions and devotions during the month of July have given way to the Roses festival, a spring symbol linked to love, beauty and devotion. Traditionally, the day before the youth went to pick roses that grew in the fields and orchards, preparing the bouquets and placed in a basket that gave to women. The celebration was religious in the morning, in the afternoon there was a parade and a harvest (La Plega del Carbassó) and everything ended with a dance at night.

During two days, usually the first weekend of August, the streets of Ordino are filled with buners, an aerophone instrument that receives a wide variety of names depending on the area (bag of moans, xeremia, coixinera, Ordino's bagpipe, bottle or cleat) and is a symbol of the parish by its legend. All events are popular, celebrated by local people and parishioners, who have gone from town to town and from a popular festival to a popular festival playing the bagpipes.

The sings of Caramelles (religious songs from the Old Catalonia sung during the Easter), and its dances, are also popular and traditional in the parish.

All content from Kiddle encyclopedia articles (including the article images and facts) can be freely used under Attribution-ShareAlike license, unless stated otherwise. Cite this article:
Ordino Facts for Kids. Kiddle Encyclopedia.