Oregon City, formerly Bloomingdale and Hengy, is an Unincorporated community between Oroville and Cherokee in Butte County, California, was one of the first mining camps in the county. It was established in the autumn of 1848 by a party of Oregonians, who came to California over the Applegate and Lassen Trails. Little more than a year later their captain, Peter H. Burnett, became the first civil Governor of California. For a time, Oregon City prospered as a gold mining and supply center, then it declined into virtual oblivion. It lies 1,184 feet (361 m) above mean sea level.

The site of the camp is now a California Historical Landmark. 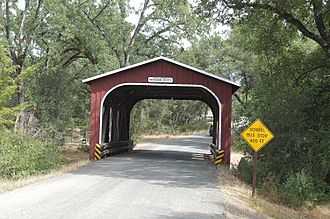 All content from Kiddle encyclopedia articles (including the article images and facts) can be freely used under Attribution-ShareAlike license, unless stated otherwise. Cite this article:
Oregon City, California Facts for Kids. Kiddle Encyclopedia.