Cherokee is an unincorporated community and census-designated place in Butte County, California. It is an area inhabited by Maidu Indians prior to the gold rush, but that takes its name from a band of Cherokee prospectors who perfected a mining claim on the site. The population was 69 at the 2010 census. It lies at an elevation of 1306 feet (398 m).

Possibly the site of the historic gold mine, on the 1994 Cherokee, California 7.5-minute quadrangle, a feature named "Cherokee Placer Mine" exists about 0.65 miles southwest of the above coordinates. USGS identifies Cherokee Flat and Drytown as historic variant names for the community. The town is located on Cherokee Road off State Route 70.

Today, Cherokee now consists of a museum and a Cherokee cemetery, as well as a few houses. The Cherokee Heritage and Museum Association maintains both.

The area that is now Cherokee was once populated by the Maidu. Around 1818 Spanish explorers found gold on Cherokee's south side near Table Mountain. In 1849 Cherokee came from Oklahoma. Welsh miners came in the 1850s, naming the town after the Cherokee and constructing many buildings in town. 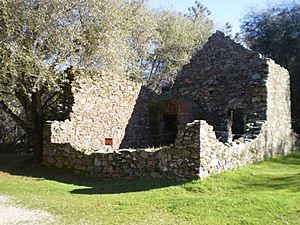 Thomas Edison owned one of the mines which sprung up in the area, and he saw to it that the mines were electrified to ease the work. The town prospered during the mining period, and Butte County's first homes with running water were built in Cherokee.

In 1880 President Rutherford B. Hayes, his wife Lucy, Civil War General William T. Sherman and General John Bidwell came to visit Cherokee's famous hydraulic gold mine. In the 1890s, the gold mines were sold off because of operational costs. At its boomtime, the town had a population in the thousands.

Cherokee as a tourist attraction

Visitors come to Cherokee to see the museum and the cemetery, and for its two annual festivals, on July 4 and on a weekend near September 24, which is called President Hayes Day .

In the vicinity are Sugarloaf, a nearby promontory which is home to deer, foxes, doves, peacocks and hiking trails. Table Mountain is famous for its springtime wildflowers.

A Chinese Taoist temple, one of America's oldest Taoist establishments (no longer in use), built in the 1860s by the town's small Chinese community, was made a state historic site.

There were 26 households, out of which 7 (27%) had children under the age of 18 living in them, 14 (54%) were opposite-sex married couples living together, 3 (12%) had a female householder with no husband present, 1 (4%) had a male householder with no wife present. There were 2 (8%) unmarried opposite-sex partnerships, and 0 same-sex married couples or partnerships. 7 households (27%) were made up of individuals, and 4 (15%) had someone living alone who was 65 years of age or older. The average household size was 2.6. There were 18 families (69% of all households); the average family size was 3.3.

All content from Kiddle encyclopedia articles (including the article images and facts) can be freely used under Attribution-ShareAlike license, unless stated otherwise. Cite this article:
Cherokee, California Facts for Kids. Kiddle Encyclopedia.