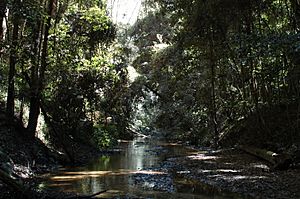 Ourimbah Creek rises on the southern slopes of the Hunter Range, about 1.6 kilometres (0.99 mi) south of Kulnura. The river flows generally south southeast and east northeast, before reaching its mouth within Tuggerah Lake, about 4.8 kilometres (3.0 mi) southeast of Tuggerah. The river descends 304 metres (997 ft) over its 37-kilometre (23 mi) course.

Ourimbah Creek and the Wyong River supply most of the fresh water that flows into Tuggerah Lake, which is usually open to the Tasman Sea at The Entrance.

The Pacific Motorway and the Central Coast Highway both cross the river, at Kangy Angy.

The name of the town Ourimbah, near which the river passes, is derived from the Australian Aboriginal word meaning bora or ceremonial ground; or the word for "the sacred circle on the initiation site for investing the Oorin or belt of manhood".

All content from Kiddle encyclopedia articles (including the article images and facts) can be freely used under Attribution-ShareAlike license, unless stated otherwise. Cite this article:
Ourimbah Creek Facts for Kids. Kiddle Encyclopedia.